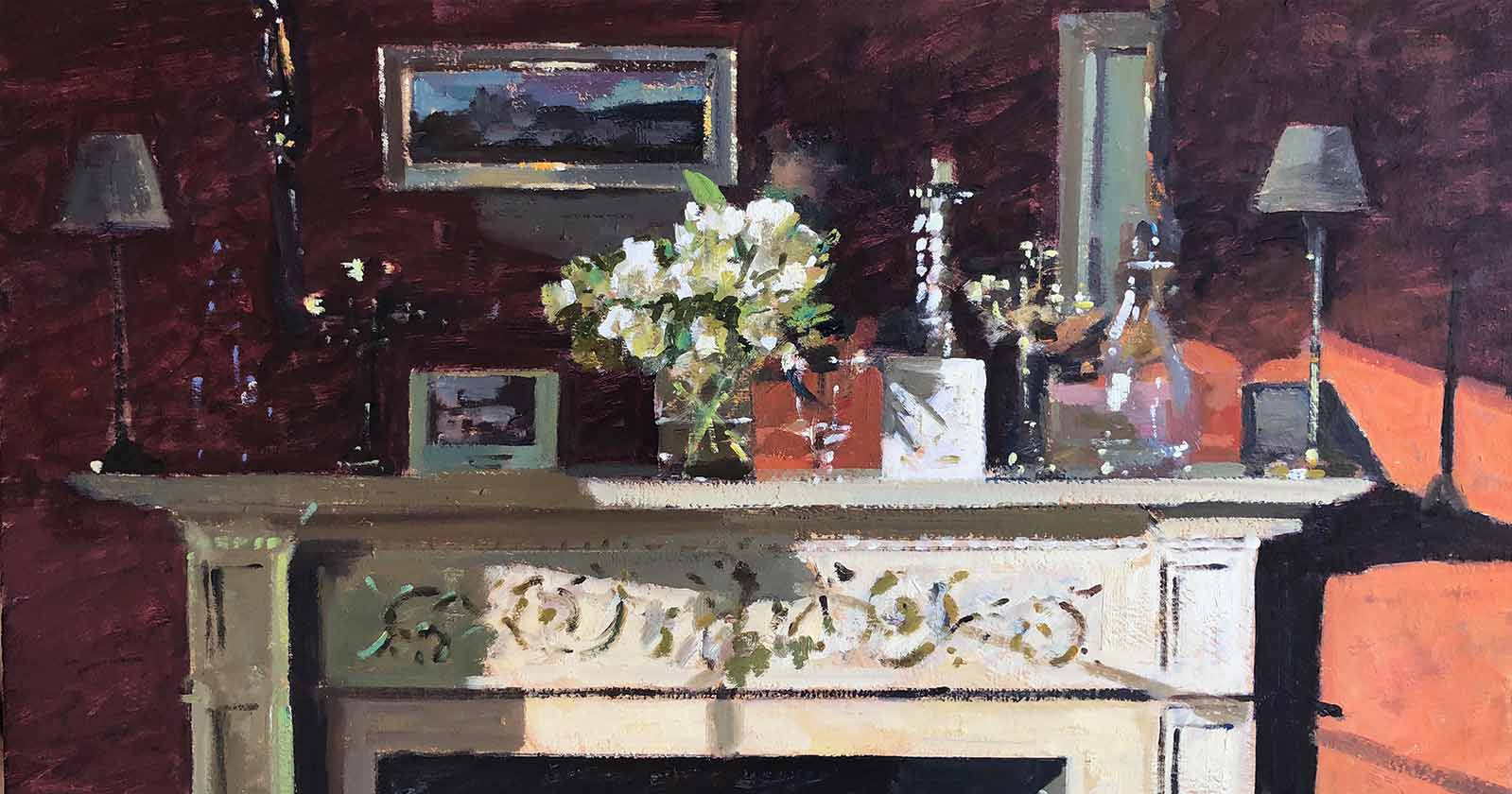 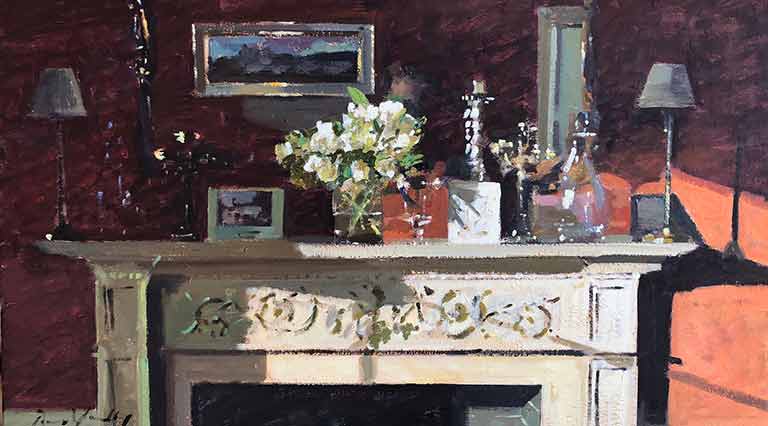 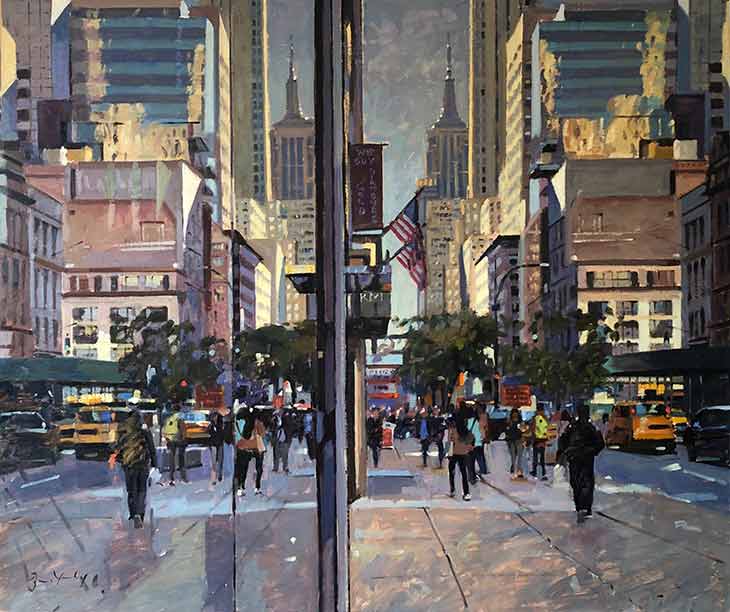 A new collection of paintings from Bruce Yardley. In this exhibition Bruce makes water a central theme of his work. He uses the reflections found in the rivers and rainy pavements to explore the qualities of sunlight and made-made illumination. 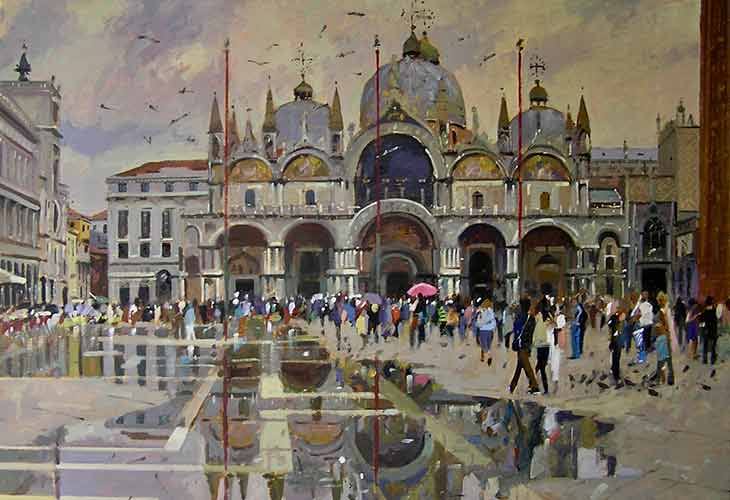 Bruce Yardley remains an immensely popular and successful impressionist. His paintings are always meticulously composed, his commitment is total – and admirable. As a viewer, it is impossible to resist. We are proud to present his latest works through June and July. 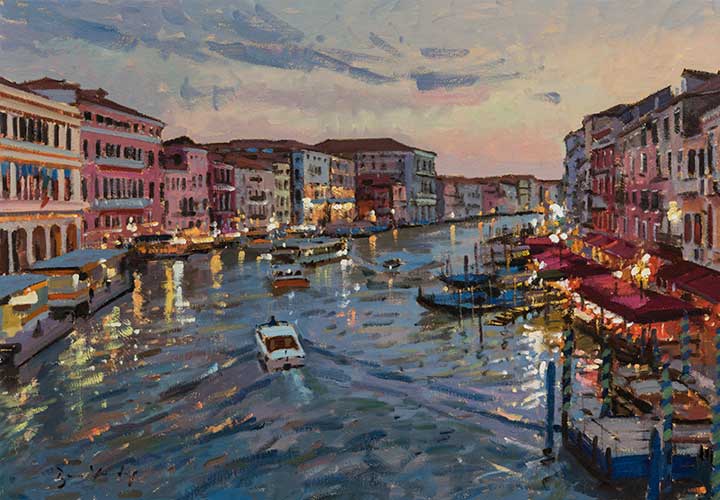 Celebrating his 10th solo show at the Catto Gallery, Bruce has travelled around the UK and Italy and bought back beautiful paintings of gilded interiors, sun-drenched landscapes and romantic night time cafe scenes.

If any one painter flies the flag for the spirit of the French Impressionists, it’s Bruce Yardley. Around 150 years ago, this band of painters broke from the classical Salon tradition to develop a more pure form of painting based on light, water and architecture.

These are timeless subjects for an artist – and they’re shared by Bruce. He’s happy to confirm the debt to those early pioneers. He says: "The Impressionists were the first painters who really meant something to me, and that continues to this day. Whenever I go to a big civic art gallery, it’s the rooms representing the half-century from 1860 that have the most life and interest for me. What I especially like about them is their willingness to paint almost everything that passed before their eyes. There was no longer a hierarchy of worthiness in subject matter."

Although Bruce cites Degas and Sickert among his chief impressionist school influences, it's Monet he cherishes most. You can see this clearly in a painting like 'Bath Abbey Morning Sun', which calls to mind Monet's Rouen series in its ecclesiastical subject matter and pre-occupation with light. It was Monet who summed up his credo as "I can only draw what I see"; interestingly, Bruce can see Bath Abbey from his house.

The ability to pull off a work as assured as Bath Abbey Morning Sun comes from the fact that Bruce has been an artist virtually all his life. He grew up surrounded by art and the paraphernalia of painting. His father, John Yardley, was a keen painter and the young Bruce would accompany him on his excursions into the Surrey countryside, drawing pad in hand.

To this day, Bruce remains a painter of the outdoors – even if he prefers to make studies ‘on location’ while completing his painting in the studio. It's probably a wise strategy. Painting 'en plein air' can get an Englishman very wet - especially a painter as interested in the technical challenge of water as Bruce Yardley. "It’s all to do with reflection, and the in-built balance that this brings to a composition," he says. "The eye seeks balance, and the more there is, the happier the result. In addition, rainy scenes are almost by definition scenes in which the light is flat, so the presence of reflections virtually doubles the compositional interest of a painting." This is illustrated wonderfully in a work such as Whitehall Rain – a fabulously balanced and evocative composition.

Occasionally, of course, Bruce travels further afield to find new artistic inspiration. In New York, for example, he felt invigorated by a landscape that had not been directly tackled by any of the painters that influenced him. "I think what happens is that you take to certain painters, and although you may not consciously try to paint what they paint, you do start seeing subjects through their eyes, in a way that heightens the appeal for those subjects,' he says."

The exception is New York. I think I can truly say that there is no NYC painter or painting that has had any discernible influence on me, and I went there with no preconceptions of any kind. But I loved the angularity of its cityscape, especially 5th Avenue, where the slightly wider perspective of the avenue balanced the strong verticals of the architecture."

The Impressionists were the first painters who really meant something to me...There was no longer a hierarchy of worthiness in subject matter."