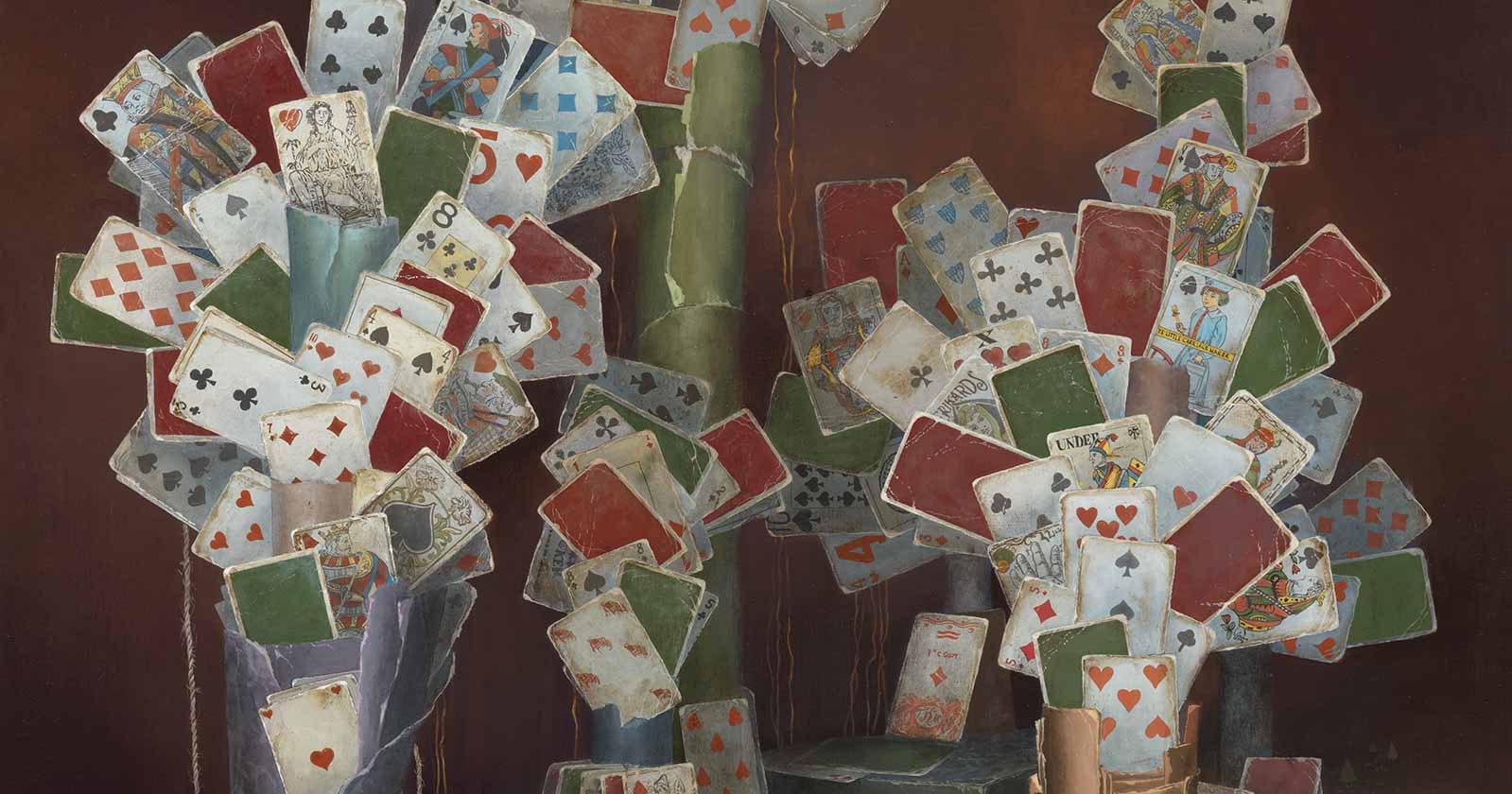 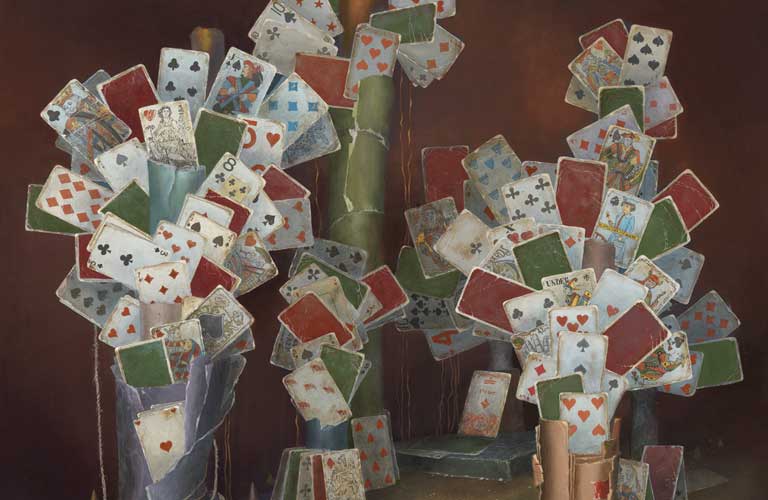 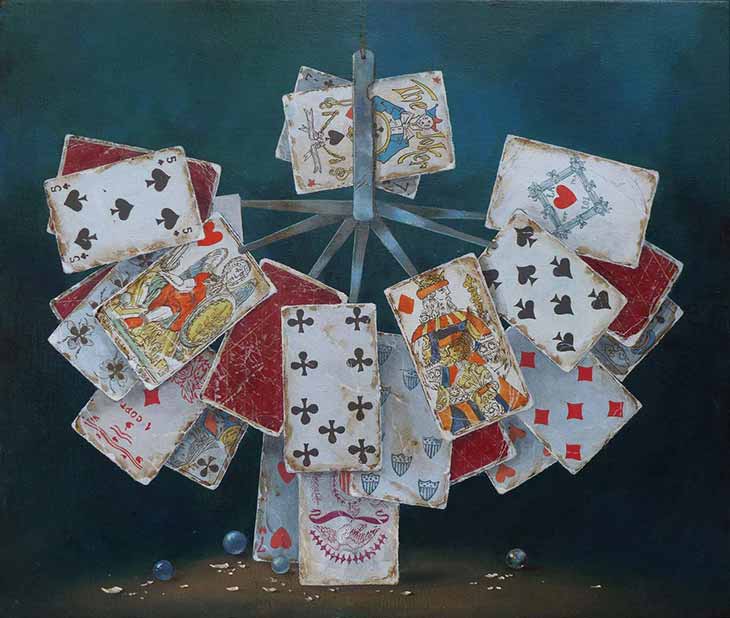 Elena & Michel Gran have been painting canvases together for over 50 years. The process has bonded them to such an extent that they often cannot remember which of them has worked on any given section of a painting. They are best known for their use of trompe l’oeil technique and in particular for their playing card paintings. We have 5 brand new works on display now in the summer exhibition. 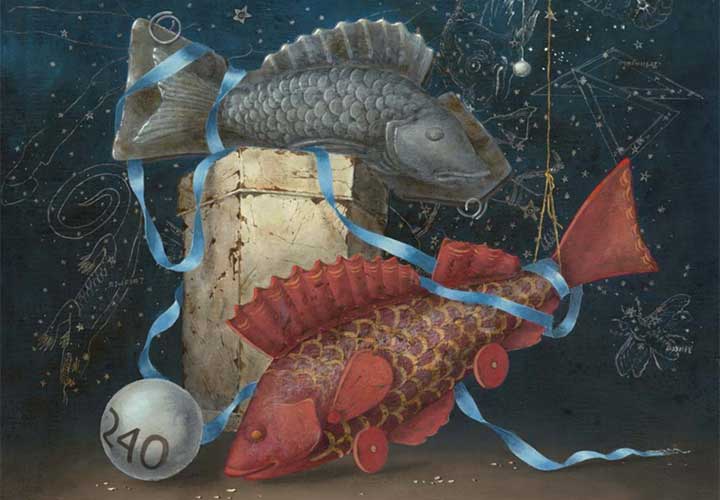 The stacked, complex arrangements of objects take the viewer into their special world of riddles, paradoxes, irony and playful charm. A fondness for visual dialogue that draws people into this world is present throughout their art.

The Catto Gallery is proud to exhibit two Russian artists of extraordinary talent and renown. Artists whose work is loved and collected the world over – whose paintings have been the subject of more than 20 solo exhibitions in Paris, Rome, London, New York and Chicago. Artists whose work has been purchased by the Louvre.

Or maybe we should say ‘artist’ in the singular. Because the quality of the paintings is not the only thing that makes Elena and Michel Gran very very special. This husband and wife team paint as one. Indeed, their singularity of vision is such that, when a canvas is finished, they often cannot remember which of them worked on any given section. Of course, this collective approach to painting goes back to the Renaissance masters, who would employ apprentices to help recreate the master’s vision in paint. And it’s not the only thing that the Grans have in common with their august predecessors.

Elena and Michel specialise in the trompe l’oeil (‘fool the eye’) technique that so fascinated the classicists when they began to understand perspective 500 years ago. The old masters created works in which people would appear to climb out of the picture frame or – when paintings were on horizontal surfaces – objects would appear scattered on tables.The Grans are the world’s greatest living exponents of this tradition. But they go beyond the mere trick of making objects appear real on a canvas to incorporate a depth of feeling, a historical context and a phantasmagorical element that extends the possibilities of the genre.

The foundations for Elena’s and Michel’s potent artistic vision were laid in 1963 when the two met for the first time at art school in Russia. Both had been immersed in the art world from an early age. Elena came from a family of painters and architects in St Petersburg. Michel hailed from Moscow, where his father worked in theatre as an artist.
Their paths crossed at the Academy of Theatre, Music and Cinematography in St Petersburg, where they were studying set design. It was a chance assignment that first brought them together creatively, when they were tasked with doing the costumes and backdrops for a play. It was the beginning of a lifelong partnership. They married and began to work in everything from book illustrating, television and film work to set design for plays and the circus. It was only after they moved to Paris in 1981 that the couple were able to fully dedicate themselves to their true passion – painting.

Their experience in set design emerged in their compositions. It allowed them to play with realism and illusion, and underpinned their growing interest in trompe l’oeil. And it made them different. Even today, their flair for imbuing everyday objects with a kind of supernatural quality separates them their counterparts. The Grans are avid collectors of antiques, and are fascinated by the history and life story behind each object.  Their Paris studio is a treasure trove of old books, scientific devices, mathematical puzzles, playing and tarot cards. Boxes of all shapes, sizes and provenances are scattered around every surface. Some of these, particularly the playing cards, regularly occur in their work.

One of the central ideas behind these still lives is that the marks on a book, box or map tell a story behind the object in the same way that wrinkles do about a person. The sombre, subdued tones, reminiscent of Jean-Baptiste-Simeon Chardin’s paintings, lend an air of mysticism to the Grans’ work. The stacked, complex arrangements of objects take the viewer into their special world of riddles, paradoxes, irony and playful charm. A fondness for visual dialogue that draws people into this world is present throughout their art.

Inevitably, the Grans have won huge acclaim from collectors and public galleries all over the world. For these two naturalised Parisians, perhaps the greatest honour came in 1996, when the Louvre Museum purchased a work called ‘Red and Black’ for the French National Museum of Cards.

This debut Catto exhibition consists of the work the couple has completed in the past few months. Fans will be delighted at the chance to see their new output so quickly – on some, the paint on the canvases has not even fully dried.

One of the central ideas behind these still lives is that the marks on a book, box or map tell a story behind the object in the same way that wrinkles do about a person."

Keep up to date with Elena & Michel Gran's work