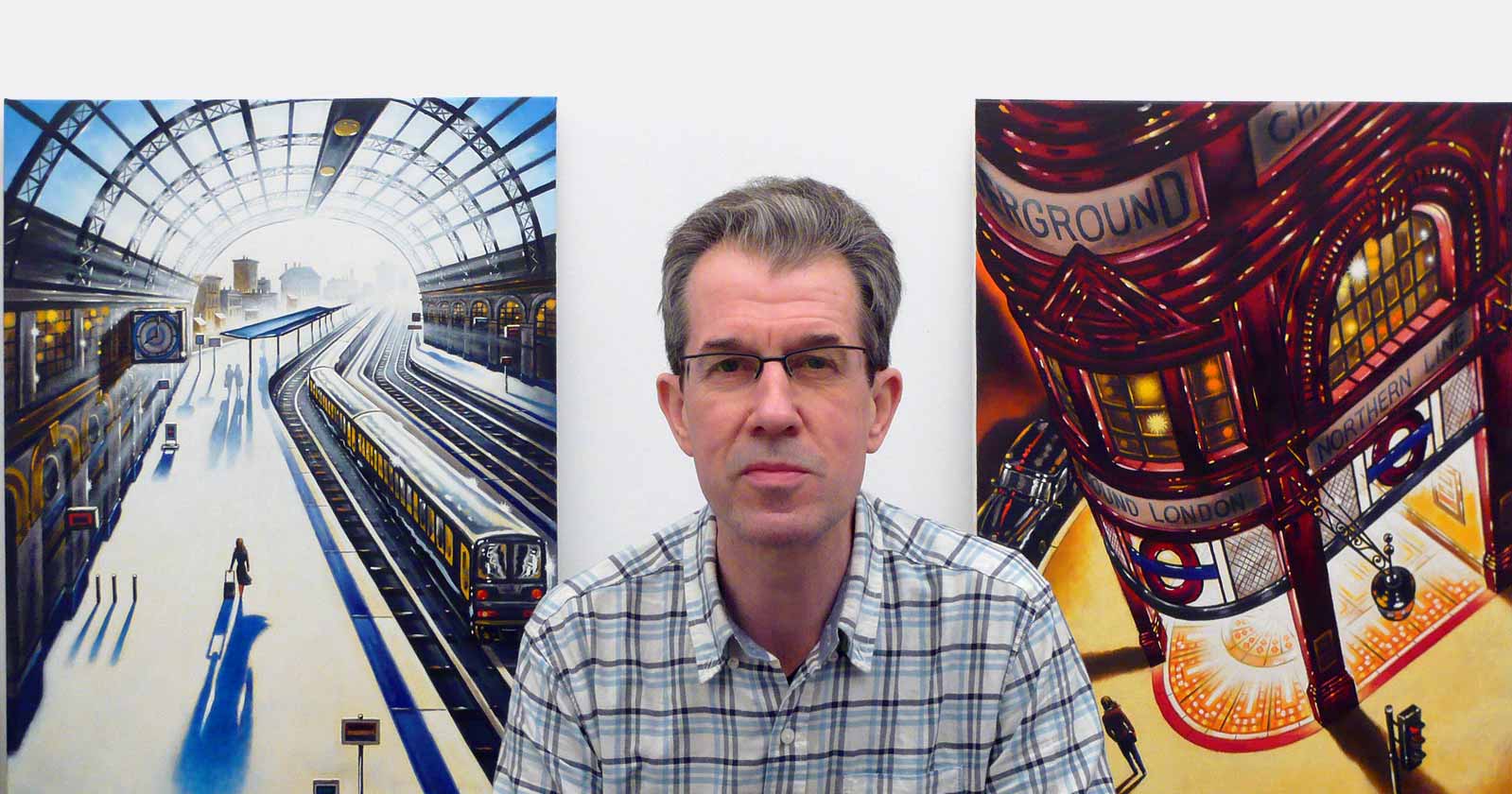 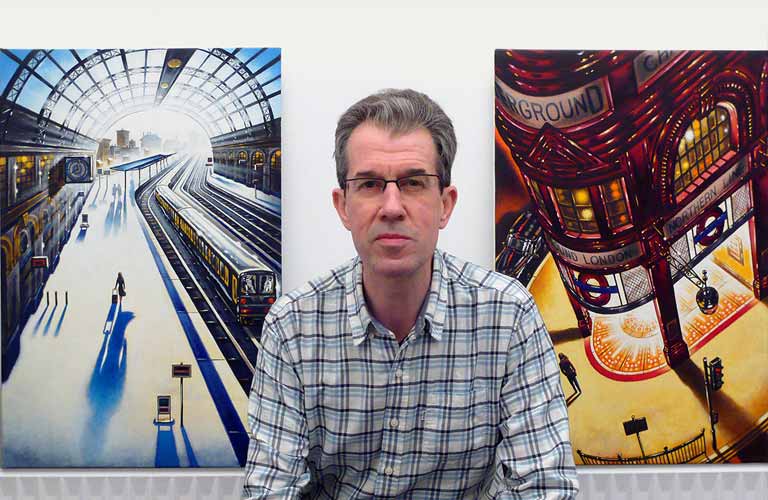 John Duffin's work is redolent with influences from cinema, graphic novels and the history of figurative painting, but from this comes a vision that is his alone. 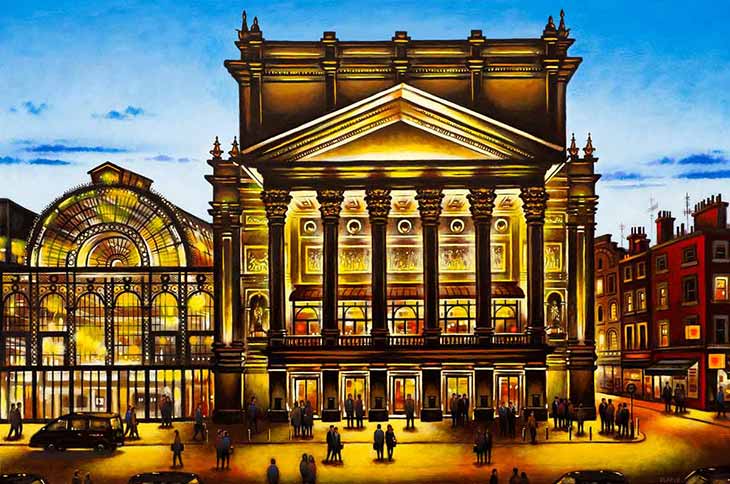 John Duffin’s paintings and etchings have a particular poignancy in this pandemic year. His architectural background gives him licence to create a distinctive visual history of aspects of central London and of early 21st century life. In most paintings the buildings dominate but the people are very much present too. 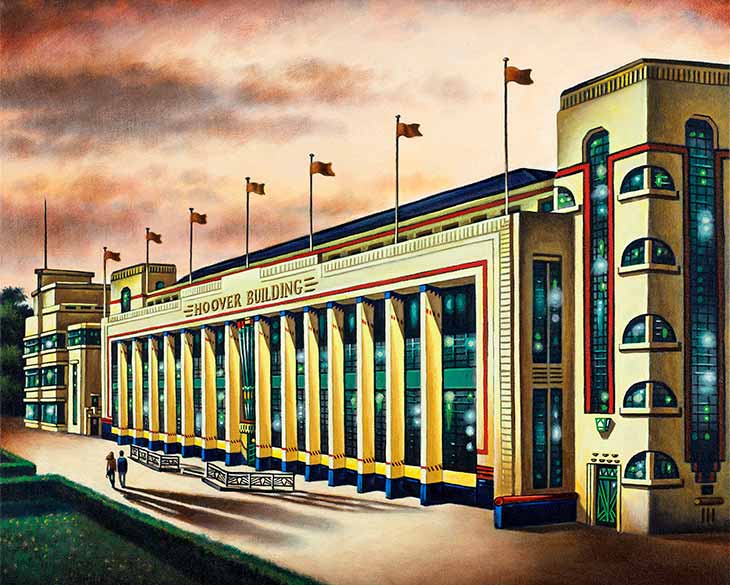 John Duffin is an award-winning contemporary painter and printmaker whose work is based on the modern environments of cities and towns. His cityscapes of architecture, lighting and figures have a distinctive artistic voice and much to say about contemporary urban life. John’s paintings are in the tradition of LS Lowry and Edward Hopper, and hold references to cinema, graphic novels and the history of figurative painting. 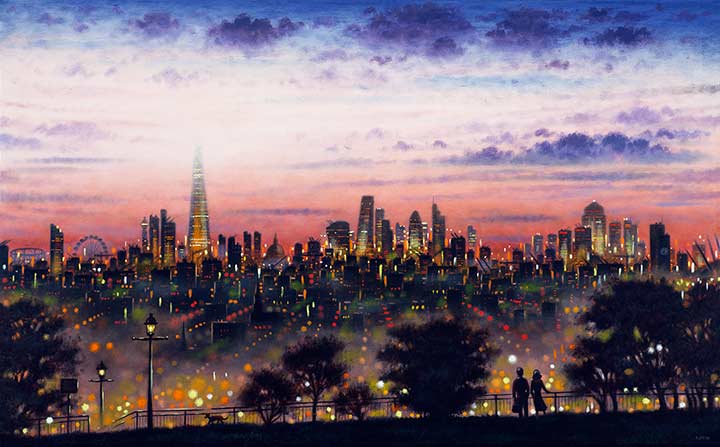 These paintings and etchings are celebrations of the city, skirmishes between light and dark. The light is not overwhelmed by the darkness although it may be a close run thing... John’s work is an unperturbed reminder of creativity and confidence in the city. Peter Freeth RA RE
London October 2016 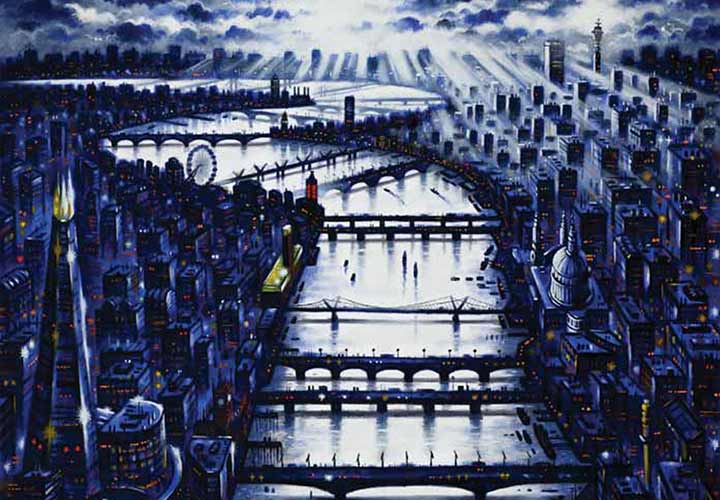 At their best, Duffin’s paintings and prints recall something of the mood of American artists: Edward Hopper and Martin Lewis.

John Duffin is a  contemporary painter and printmaker whose work is based on the modern environments of cities and towns, creating dynamic, cinematic images of contemporary urban life. His unique images of architecture, lighting and figures have been greatly praised and awarded, recently receiving The Most Outstanding Print Award from Sir Peter Blake.  He has a distinctive artistic voice and has much to say in his work about contemporary life in all of it’s manifestations.

John Duffin trained as a Draughtsman and Naval Architect in the shipbuilding industry at Barrow-in-Furness in Cumbria before studying Fine Art at Goldsmiths’ College in London - his contemporaries there were many of the Britart generation. He then studied MA Printmaking at Central St Martins in London and became a member of The Royal Society of Painter Printmakers (RE) and has exhibited his prints at the Royal Academy Summer Exhibition consistently for the last 20 years. He has won many awards for his paintings and prints and his work is in many public and private collections including:

University of the Arts, London

Duffin's work has been praised and collected by many private buyers including Sam Mendes (Director), Polly Toynbee (Journalist), Hunter Davies (Writer and journalist), Libby Purves (Broadcaster and writer) and many other discerning collectors. He has appeared on BBC National News and BBC Radio 4 discussing his work and has had 3 books published on his paintings.

His work is in the tradition of LS Lowry in Britain and Edward Hopper in America and like these artists he creates unique views of contemporary urban life - a combination of his ability as a draughtsman, his imagination and his personal use of perspective and colour. He makes drawings and watercolours in front of his chosen subject and takes these sketches back to his London studio where he recreates the place anew via his own imagination. His work is redolent with influences from cinema, graphic novels and the history of figurative painting, but from this comes a vision that is his alone.

John Duffin's work is in the tradition of LS Lowry in Britain and Edward Hopper in America."

Keep up to date with John Duffin's work