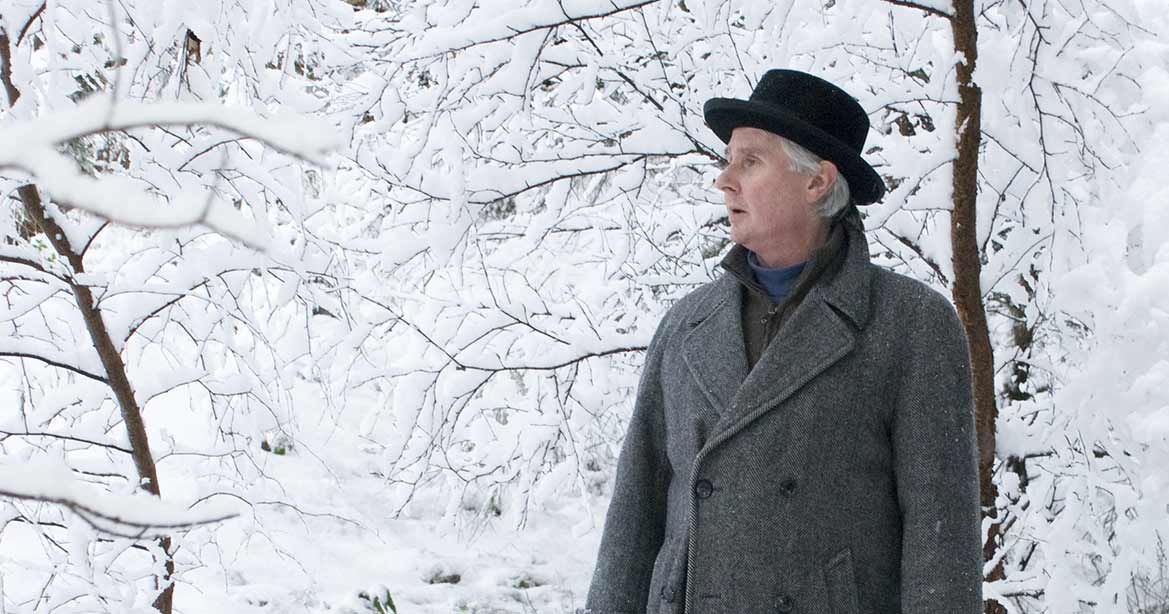 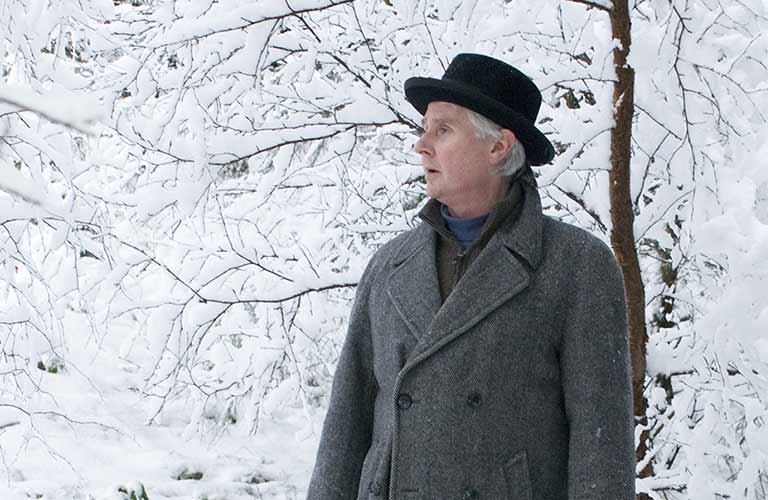 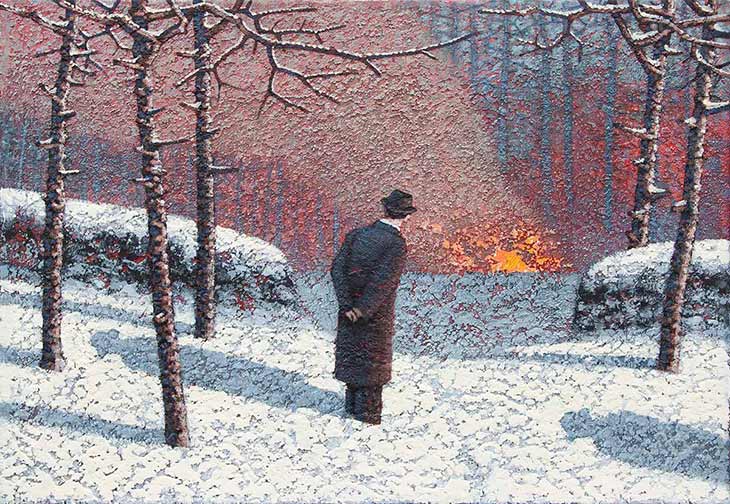 Mark Edwards confesses he has no idea of what his paintings are about, for Mark, there is no explanation. It’s the mystery that matters. He believes there’s a good parallel in the work of dramatists such as Pinter, Beckett and Brecht. 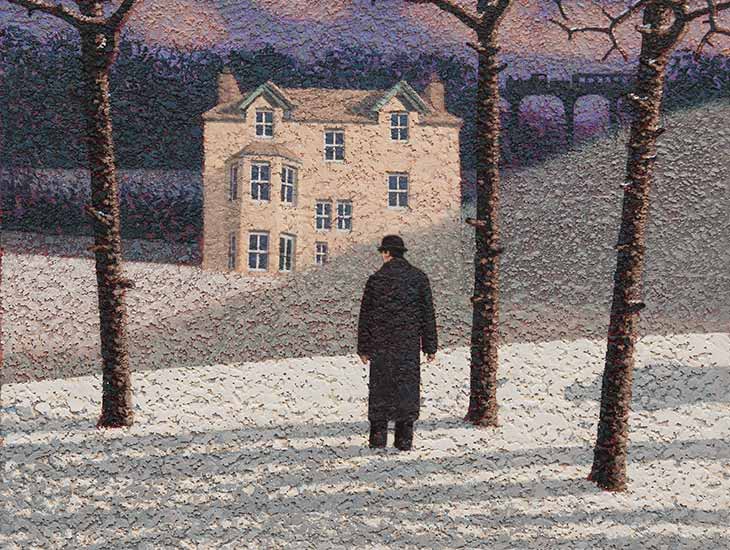 The Catto Gallery is pleased to be presenting Mark Edward's return to the gallery with a new collection of stunning surrealist masterpieces. Watch this space for more information. 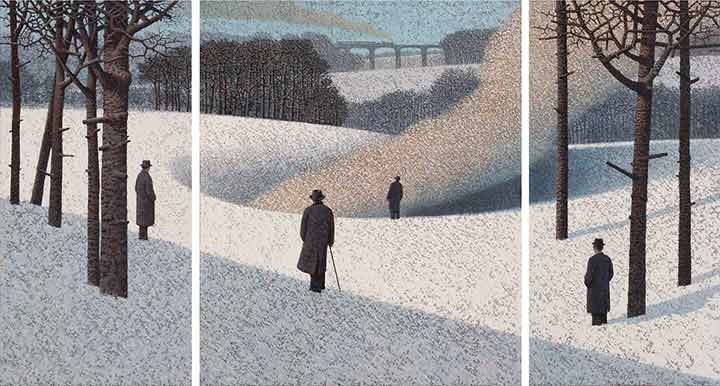 This is Mark Edwards’ third Catto show. His last two were sellouts, vindicating his decision to focus all his artistic energy on one aesthetic. One setting, actually: the White Wood...In every new painting, Mark is still trying to find the answer. And so are his legions of fans...

A conventional looking man, a civil servant perhaps, stands with his back to us. Ahead of him is a billowing cloud ejected by an unseen steam train. To the side of him, also unseen, is another man holding a balloon. Why? What has brought this bizarre combination together? And why here, in this wintry forest far from anywhere?

The scene unfolds in 'Man With A Balloon', a painting from the remarkable series 'The White Wood' by the artist Mark Edwards.

This series is the latest phase in the artistic story of Mark Edwards, which began when he went straight from school in 1967 to Medway College of Art, and continued with his studies at Walthamstow College of Art in London.

Mark Edwards grew impatient waiting for the artist's life, and didn't complete his degree. Instead, he taught drawing at the local adult education centre, whilst painting and displaying his work in local galleries. By 1974 he was ready for the second great spontaneous act of his artistic career. With the active support of his future wife Sally, they bought a 1958 Ford Prefect for £25 and drove to a remote cottage on the shores of Loch Hope surrounded by the dramatic mountains of the North Coast in the Scottish Highlands.

Here the young couple rented an old shepherd's cottage – and stayed for 28 years (10 without electricity).

It was a drastic move, one that any creative person would admire, giving Edwards the freedom and space to pursue his artistic ideas. Over the decades he regularly exhibited throughout Scotland, supplementing his income by working as a gillie during the deerstalking season on the Duke of Westminster’s estate.

During this period, influenced by this seasonal work, he began to gain a reputation for his series of paintings depicting the lives and work of the men who fished and stalked in these isolated shooting estates.

In 1984 two significant events followed: Edwards, who had always wanted to stretch himself creatively, was signed to the prestigious London agency Artist Partners. And the cottage got electricity and a phone!

In the intervening years he illustrated literally hundreds of covers for authors such as Kingsly Amis, Beryl Bainbridge, Sue Townsend, Philip Pullman, Michael Morpurgo (including War Horse) and CS Lewis (Narnia Chronology). Mark's varied illustration technique has, with other international illustrators, been analysed in 'The New guide to Illustration' (Phaidon Press 1990).

In 2000, after their 3 children had left home, Mark and Sally moved from their remote shepherd's cottage to their local village and, although Mark's career had ascended steadily over the last two decades, by 2007 he felt ready to depart from his successful deer stalking and fishing paintings and find a new vision. Which brings us back to the surreal and occasionally unsettling 'The White Wood'.

Here's how Mark Edwards describes its genesis. "My oil paintings were very traditional and although I was building up a reputation especially amongst the shooting fraternity, I was becoming increasingly disenchanted artistically with its creative limitations.

"So one day in 2007, instead of placing a deer in the wood, I came across a 1950's photo in a magazine of a man reflected in a window on a busy New York street dressed in a bowler hat and coat, so I placed him in the wood. Instantly there was an immediate tension: what was he doing there?"

Edwards had hit upon a strange series of paintings that appears to promote a very personal interpretation that he still finds immensely absorbing. This continually developing series of work immediately places him in the tradition of a very British form of surrealism. Which after three previous sell-out exhibitions, continues to draw admirers across the UK, Europe, Australia, Asia and North America.

The Catto Gallery is pleased to welcome Mark, his men, his balloons and those trains to the gallery for his debut show.

This continually developing series of work immediately places him in the tradition of a very British form of surrealism. Iain Barratt Director Catto Gallery