When The Brotherhood of Ruralists first went public, in the Peter Blake 'room' at the Royal Academy's 1976 Summer Exhibition (it had been founded the year before), the critical reaction was distinctly hostile. This was the age of a particularly austere brand of conceptualism after all and the rural dream that this work appeared to embody just did not seem to fit such progressive narratives – it was viewed as just a retrogression into 'flower power'.

Forty years on, while the conceptualists have largely faded from memory, a majority of the 7 artists who made up the original grouping are still actively pursuing the Brotherhood's original aims and ideals as an essential element in their artistic practice; the Brotherhood may long have been informally disbanded but, as this current exhibition of three of its original members – Graham and Ann Arnold and Annie Ovenden – makes plain, the aims and ideals still provide an extremely fertile ground for a figurative, landscape-based art that still touches resonant chords in our psychic imagination.

At the core of the Ruralist ideal was always a shared feeling for the importance of landscape as a container of human emotion and of intellectual and artistic passions held in common rather than a closely shared style, and this has remained essentially true 40 or more years on. For Ann Arnold these feelings have always become apparent in her painting's intense focus on people and their presence in the landscape and in the relationship  between the rhythms and events of their lives and those of the landscape.

In a work like The Walk Through The Wood for example, where, though no human figure is actually present, there is a quite unmistakable stimmung which manifests itself in the focus of the composition, the open gate in the wooden fence, that suggests both a recent passer-by and a well-trodden pathway in the landscape.

Equally, in Cat Walk , the seemingly slumbering, 'early morning' house that seems almost to emerge mushroom-like out of the ground on which it stands, suggests, with a quiet intensity, so many stories of human activity, of lives being lived within and around it.  Or, as in Night of the Beacons, with its flames and smoke flaring up into lonely hillsides - a human action - it becomes an assertion of the human presence within an austere landscape. A significant part, too, of how this intensity of feeling is conveyed lies in Ann Arnold's wonderfully soft, dense, feather-like brushstroke and keening, high-pitched colour - the painted mark at one with the emotions being conveyed.

At first sight, her husband, Graham Arnold's work here could not appear more different – assemblages of painted and collaged boxes on the one hand, crisply painted, luminously coloured landscapes with figures, almost surreal in character on the other. The two assemblage boxes in this show – Heavenly Bodies and Lost Summer - form part of a series that goes right back to his roots as a child when his father, an amateur artist, used to arrange miscellaneous groups of little objects for his six-year-old son to paint and the idea became, of course, central to his practice from the mid-60s onwards.

They have, above all, always provided a crucial means for bringing together all his diverse passions – music, ancient history, astronomy, poetry, natural history among many other things – and then subtly linking them in mood and proximity to create surprisingly powerful effects. Like Ruskin he believes that in making or seeing a work of art we bring to bear on it feeling, intellect, morality, knowledge memory and every other human capacity all focussed in a flash on a single point. Looked at this way, its insistence on the essential human emotions a painting should aim to convey is not so very different to his wife, Ann's, work.

Similarly The Wilderness, its style referencing the Early Italian Renaissance he has always so loved, becomes a compositional assemblage of multiple interests – Stonehenge in the distance, Commedia dell'Arte figures, medieval Renaiisance pavilions, Greek mythology and, finally, himself as a hermit-like figure to one side, is a marvellous summation of a lifetime's interests.

Annie Ovenden has a very different take on the landscape again. The youngest and least experienced artist within the Ruralist group when it was first formed, she has over the years matured into a painter of huge technical assurance and enormous character, as one of her major compositions in this show - Dancing in the Air III – demonstrates.

Based, as much of her work always has been, on things suddenly seen in the landscape while working in the garden, on the land or with the animals in her Cornish garden, some quality of light perhaps or, as here, the ecstatic murmuration of birds at dusk, Annie Ovenden's gift has always been to pinpoint precisely the feelings she has received from the sight in the landscape and then convey it with deceptive directness and simplicity. It is exactly the same with the many smaller oil and pencil studies of individual or small groups of trees, the detail and intensity of her rendering, almost Pre-Raphaelite in character, making it almost as if the tree is having its portrait painted and its inner personality revealed.

As the Brotherhood of Ruralists demonstrated so fruitfully in the 1970s, here are three artists, taking rather different formal approaches to the landscape, still arriving at an intensely moving commonality of feeling and emotion. 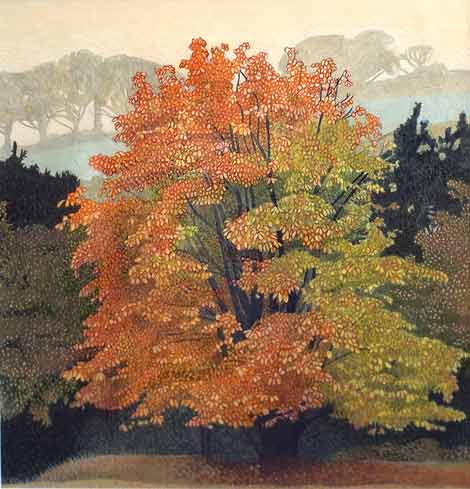 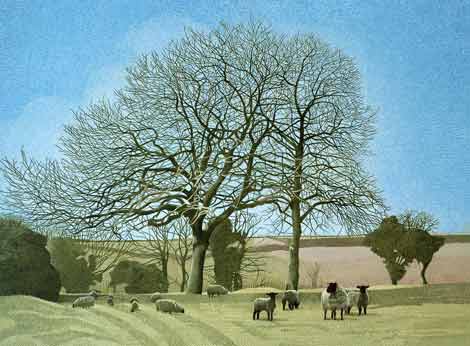 Dancing in the Air II

Dancing in the Air II 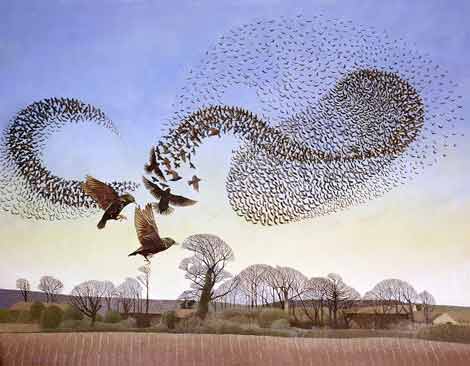 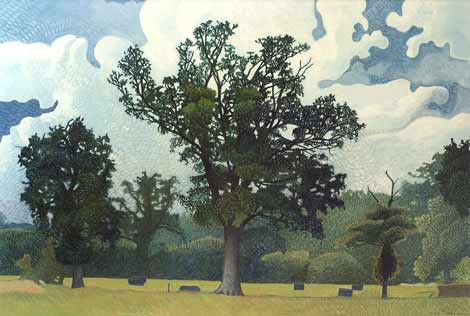 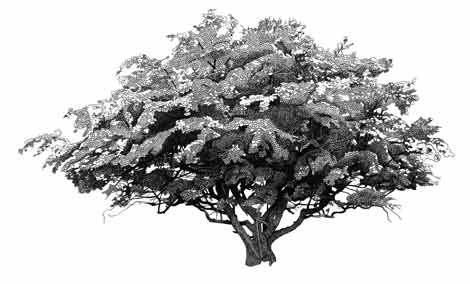 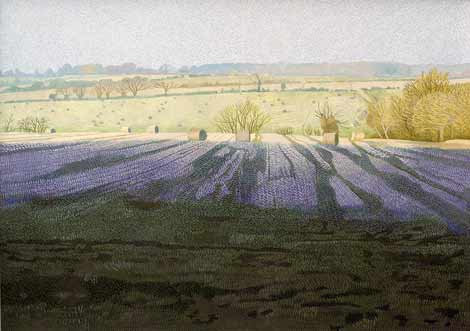 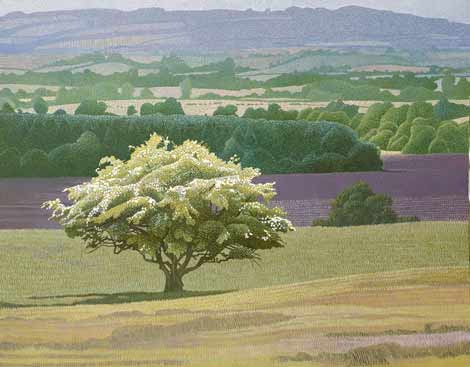