There are two paintings in this new exhibition by Bernhard Vogel that perfectly illustrate the masterly powers of the Austrian painter.

Then we move to ‘Primrose Hill II, London’. The jazzy geometry remains. But what’s this? A sky of vermillion and cobalt? Bursts of light emerging from inky black streets?

The two works reveal that true artists don’t simply commit their visions to canvas. They see things differently in the first place.

In this new show, we see evidence of Bernhard’s special gifts again and again. Regular visitors to the Catto will not be surprised. He’s one of the gallery’s most exciting and well-loved artists.

Vogel’s artistic journey began when he was 23. By accident: literally. After a motorbike crash, Vogel picked up the brushes he’d abandoned as a schoolboy and re-discovered his passion and talent for painting. He soon became involved with a local school of watercolorists.

It didn’t take long for Bernhard’s work to reach a wider audience. He was part of the 1985 Salzburg Summer Academy, and two years later he embarked on a career as a full-time artist. His first London exhibition was in 1990.

In time, Bernhard turned his attention to oil and from there to mixed media. Simply, he will consider any material if it captures what he’s trying to express. This technique works especially well in Bernhard’s marvellous urban scenes.

Sometimes there’s an obvious visual correlation. In this show, for example, a sheet of corrugated paper stands in for the ridged walls of a skyscraper on ‘New York Lower East Side’. But elsewhere, Bernhard trusts his instincts and throws in a random unexpected image. In ‘34th Street (Fair) NY’ a huge disembodied eye stares from the wall. Sure, it could be a neon billboard. But it’s disquieting nonetheless.

In ‘London From The Shard’, Bernhard’s extraordinary flame-red vision of the Thames is interrupted by a cut-out that reads ‘Fly High’.

It’s utterly jarring, yet it works brilliantly. And the reason, to repeat, is because Bernhard sees things differently. And he has the serene confidence to try things.

There’s something for everyone in a Bernhard Vogel show - from pretty floral watercolours to brooding glutinous night-scapes, from experimental collage to semi-abstract drip painting. Please take a look. It’s a truly special event. 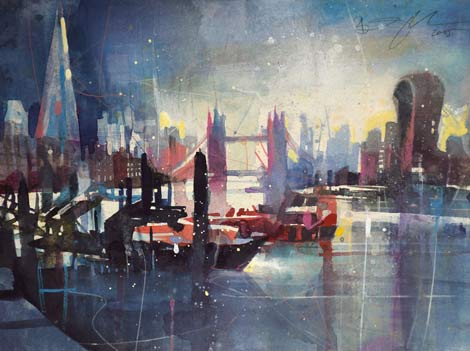 From the Angel, London

From the Angel, London 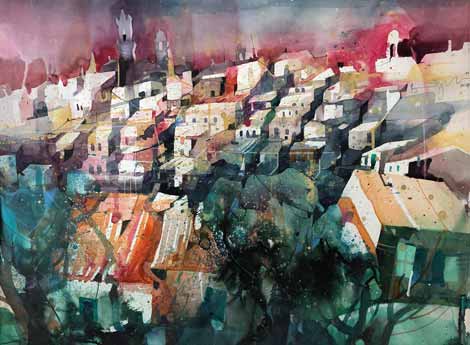