How can the artist address the monumental? The romantics took themselves off to mountain ranges and saw God in billion year old rock formations. The abstract expressionists - Rothko, notably - sought transcendence in huge slabs of floating colour.

What can the contemporary artist do? Bogdan Molea creates monumental paintings whose subject matter is paper. In so doing he reflects the anxiety of the ephemeral man-made world. He says the contrast between the ‘massiveness’ of the idea and the fragility of the paper ‘addresses the entropic tendencies of the modern world’.

Bogdan has been pre-occupied with the monumental since his student days. He learned his craft the traditional way in communist Eastern Europe. He was born in Bucharest, Romania, and displayed a prodigious natural flair for painting that saw him gain admission to the renowned Nicolae Grigorescu Fine Art Institute.

The schooling was technically rigorous, and Bogdan flourished. He graduated in 1984 with three majors in Monumental Art, Conservation/Restoration and Art Teaching. During these formative years, Bogdan was exposed to the methods of the Italian Renaissance masters. Their vision and technique left a deep impression.

Today, Bogdan’s work is far removed from the religious and anatomical concerns of the classicists. They painted hymns to God and nature. He deals in scrunched up paper. But there are still parallels. Bogdan depicts the folds in the paper with a skill and care that recalls the finest Renaissance anatomical studies.

And, of course, his works strive for a timeless, majestic quality. Bogdan makes this explicit in some of the paintings, using titles like Twister, Double Arch and Elements. Then there’s Primordial Architecture - a clear reference to Stonehenge.

Thus, Bogdan pulls off the admirable artistic trick of creating work that is at once ancient and modern. His intention, he says, is to ‘remind us of some of the highest moments of post-Roman art while hinting at contemporary imagery - photography, 3D renderings and film’.

Though Bogdan is known best for his studies in paper and metal, he has other preoccupations. In this show, for example, the artist reveals his fascination with sea shells. Works such as Natural Design I and II are little gems of intricacy - showcases for the painter’s amazing technical gifts.

Bogdan’s unique output has earned his a devoted global following. In 1999, he re-located to Toronto, Canada, where he still lives. This is his fifth Catto show in 14 years. 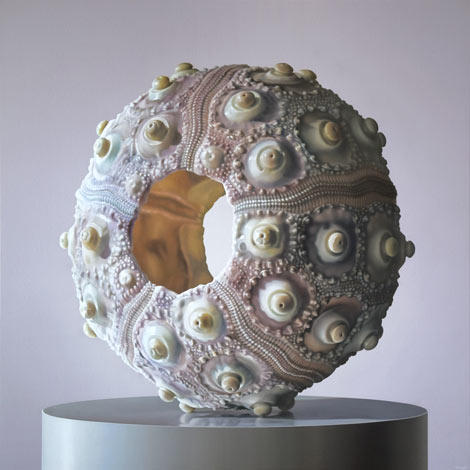