Bruce Yardley has said that whenever he visits a big civic art gallery, he heads straight for the rooms representing the half-century from 1860. What he’s hoping to find are the works that best reflect the seismic change that occurred in those 50 years – paintings by Monet, Sickert, Degas, Pissarro and the other Impressionist greats.

In their own time, of course, the Impressionists caused outrage and sensation. They were outsiders, whose work existed outside of the mainstream. They could certainly not be found in any civic art gallery. But ultimately, the authenticity of their approach won out. 150 years later, art lovers and painters alike treasure their work.

Bruce Yardley is both a fan and a practitioner. He is, as his museum habits show, a devotee of its pioneering greats. But he is also one of the UK’s foremost painters of modern Impressionistic works. In his new collection for the Catto, Bruce proves again that this beloved school of painting is in safe hands.

Like his heroes, Bruce is interested primarily in the magical effects of light, colour and spatial harmony. Typically, he travels to some of Europe’s most beautiful cities in pursuit of them. Interestingly, what inspires him most are the very structures that define mid 19th century life: the cathedrals, the town houses, the bridges, the squares. Obviously, there’s a mathematical harmony in these edifices. These objects also tend to reflect the prevailing light conditions in unexpected ways, all of which is inspiring for a painter.

In his new collection for the Catto, Bruce brings us the remarkable tokens of his most recent expeditions. Of particular interest are the paintings of Lisbon and Oporto. Bruce rarely travels to Portugal, but he’s glad he did this time. He describes his two destinations as “beautiful, hilly cities of grand, slightly faded 18th century architecture”. And he was drawn to their iconic landmarks: Oporto’s quayside with its striking late 19C iron bridge designed by a pupil of Gustav Eiffel, and Lisbon’s Torre de Belém fortification.

Bruce’s paintings are always meticulously composed. Though Impressionists can be ‘loose’ in their approach to colour and brushwork, this is not true of their arrangements. Bruce certainly thinks hard about composition, and looks for lines and shapes that direct the eye as he intends.

This can take him in unexpected directions. In his Portuguese works, he found what he needed in the tram system. “To my painter’s eye, the tramlines and overhead wires are especially helpful in tying compositions together,” he says. “I hope this comes across in my painting of Bairro Alto, a smart neighbourhood of shops, restaurants and cafes just behind the waterfront.”

Elsewhere in the new show, the principal subject – not for the first time – is Venice. Bruce has painted the City of Light numerous times. He never tires of it. He says: “No painter – certainly no Impressionist painter – should apologise for painting this city. Its picturesque qualities are unique, and will never be replicated elsewhere.”

He is similarly unrepentant about focusing on what he calls Venice’s ’set-piece views’: Piazza San Marco, the Grand Canal and so on. “These are views that have entranced painters for centuries,” he says. “There is a special thrill to be had from painting views that Canaletto painted nearly 300 years ago.”

Another reason for returning is that Venice has a restoration programme, and many buildings that have been hidden behind pictorial boards are suddenly on view once more.

Of course, there is a more contemplative side to Bruce’s painting: his still lives/interiors. This show reveals a set of beautiful new works painted inside his own home and also in destinations such as Browns Restaurant in Bristol, and Cliveden. Clearly, these are ‘quieter’ works than the landscapes, but they share the same attention to light and composition.

Travelling to the west country to paint these canvases was a kind of homecoming for Bruce. Though born into an artistic family (his father is John Yardley the watercolourist) he had studied history at Bristol and Oxford, before becoming a full time painter in 1996.

Over 30 years later, Bruce remains an immensely popular and successful artist. Also, a hungry one. Bruce is simply consumed by the craft of painting. His commitment is total – and admirable. As a viewer, it is impossible to resist. 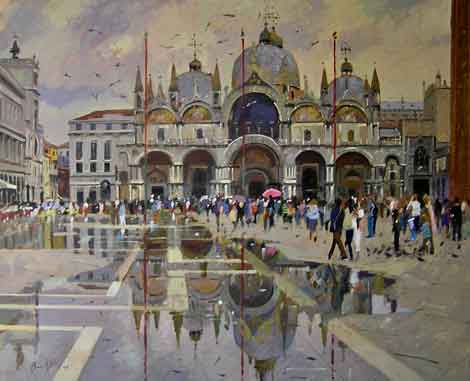 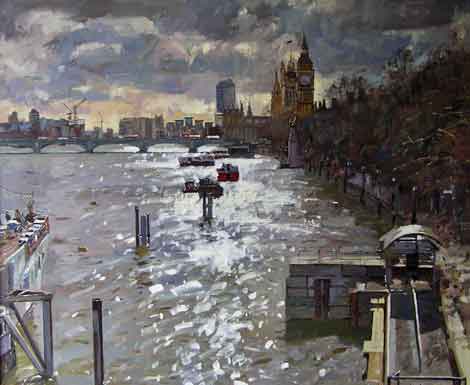 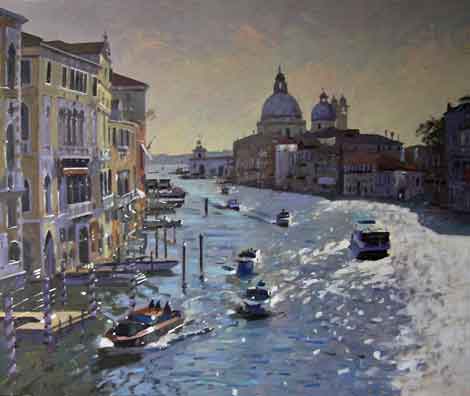 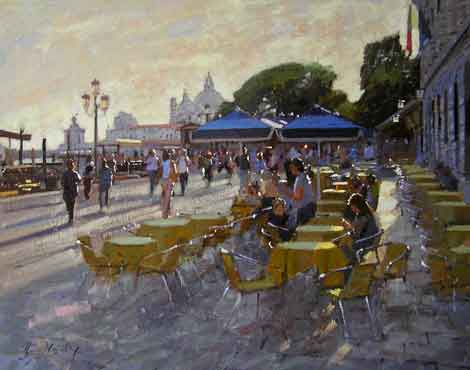 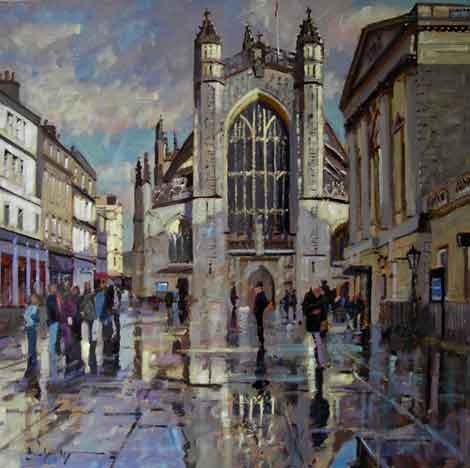 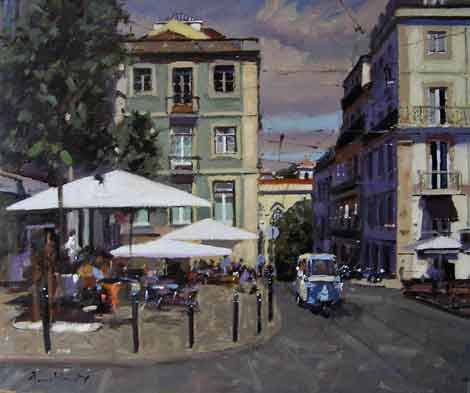 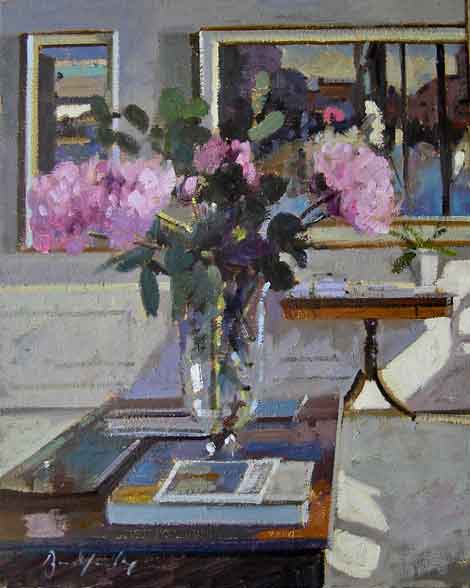 Peonies in the Drawing Room

Peonies in the Drawing Room 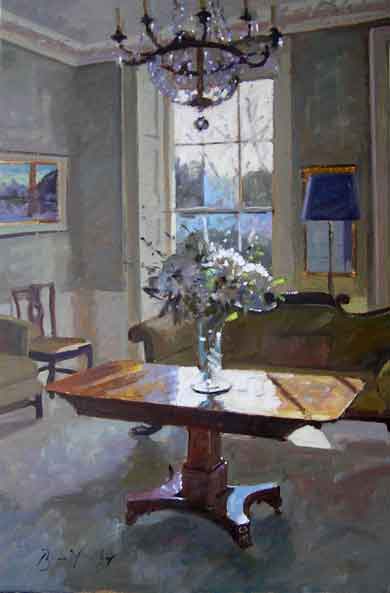 Flowers on the Sofa Table

Flowers on the Sofa Table 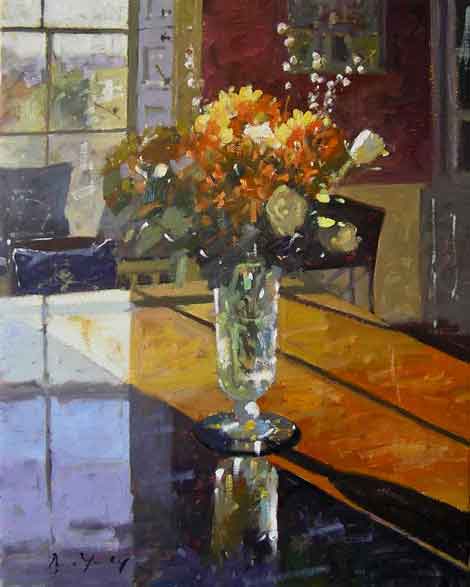