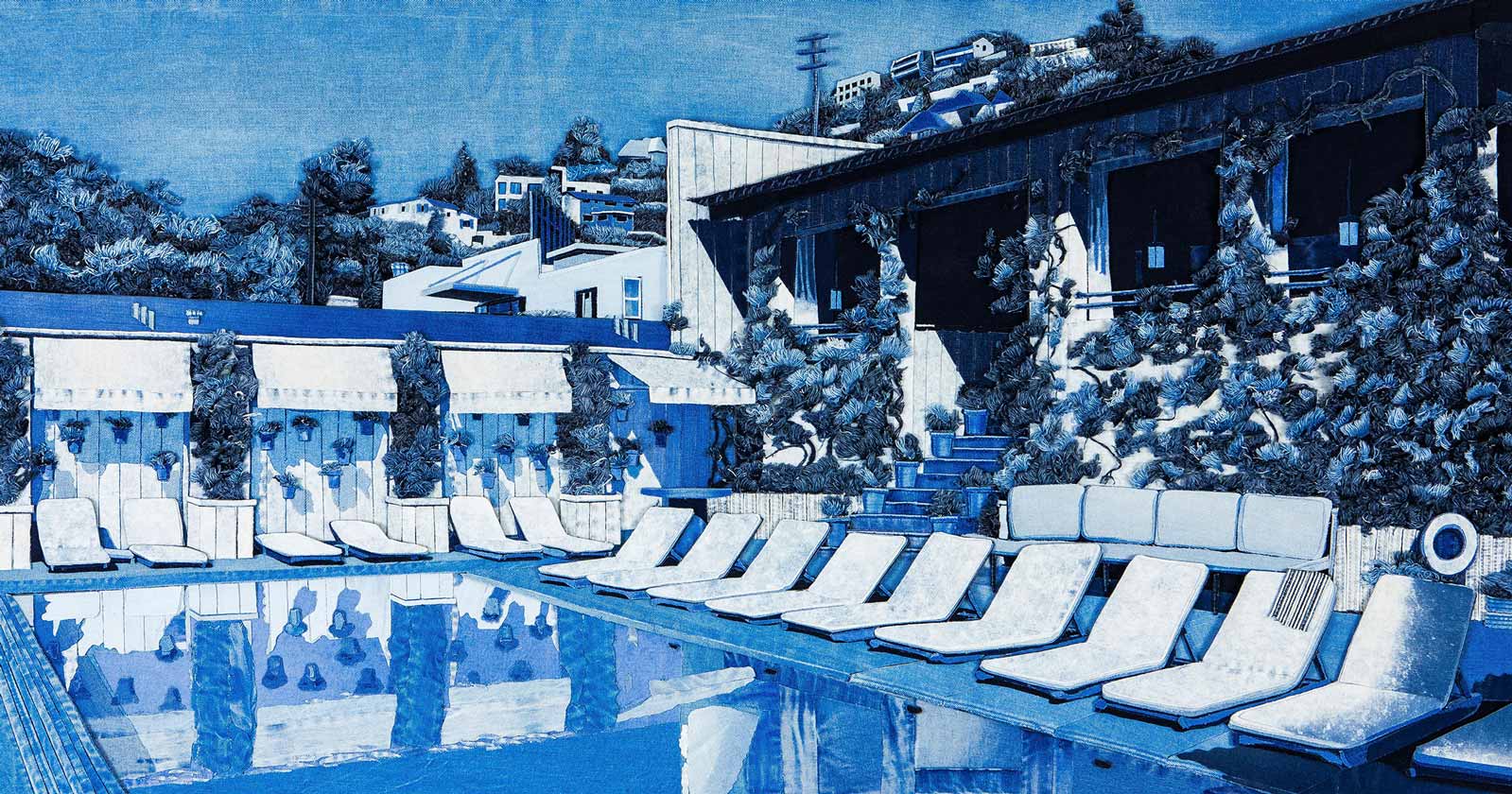 Ian uses denim as a painter uses paint... The entire surface of these works is made from denim. The scissors are Ian´s paint brush and he handles them with virtuosity. 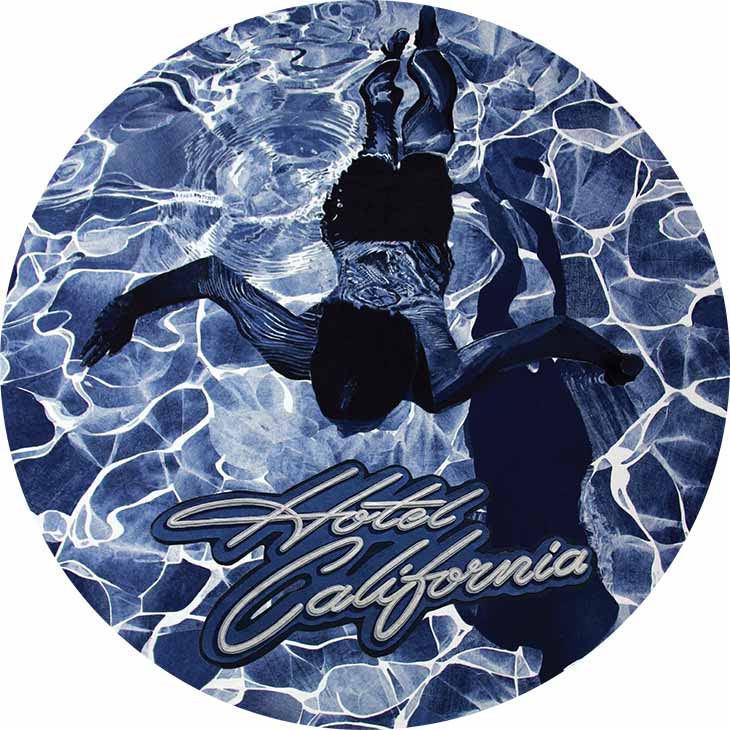 Opening soon - Hotel California - the long awaited new show from Ian Berry, a unique talent in the art world whose 'paintings' are made entirely from denim. Hotel California, is inspired by David Hockney's pool paintings and is an incredible technical achievement. His artworks are the ultimate in upcycling and have been displayed in museums, galleries, department stores, and denim stores all over the world. Prepare to be amazed! 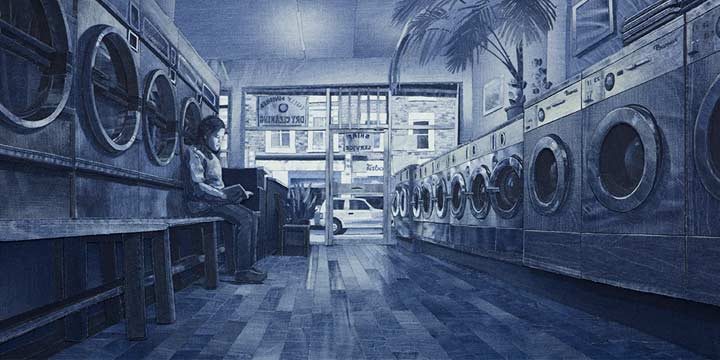 The denim installation is part of an exhibition of works by Ian Berry presented by Catto Gallery and running from 16th November 2016 at 'Gallery Different'. 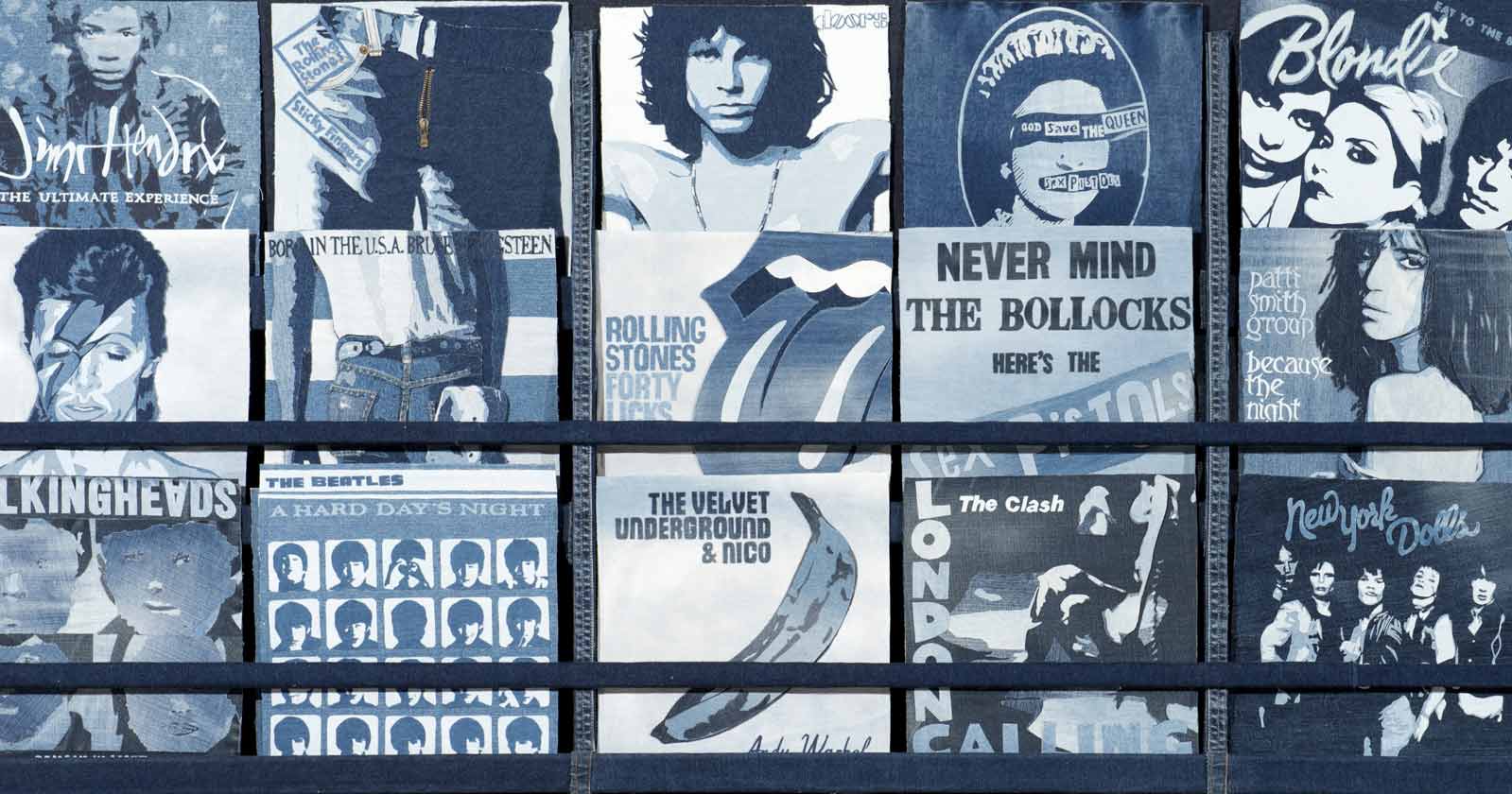 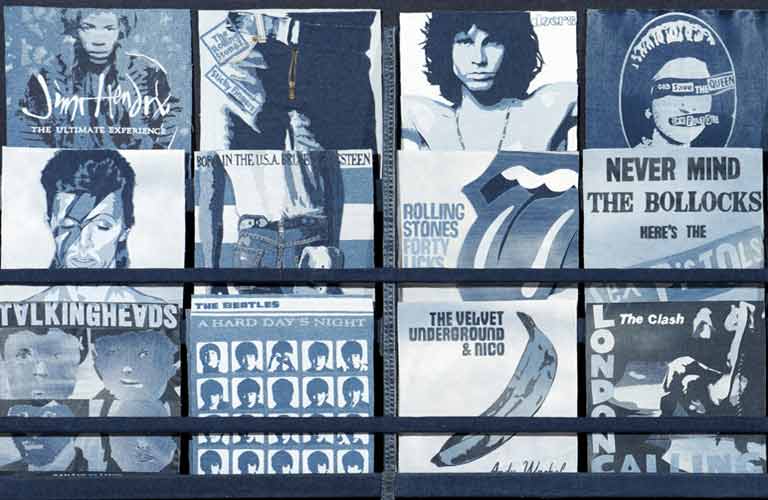 In each work, Ian carefully selects denim samples that he cuts, trims, tears and then glues to create works of astonishing depth and space.

We all love denim, don't we? It's the great democratic fabric, worn by everyone from the farmer to the aristocrat, the manual worker to the oligarch.

But for the British artist Ian Berry, it is so much more. It's probably fair to say, Ian is obsessed. This is the guy who changed his name to Denimu and made a career out of turning jeans into works of art.

And what absolute treasures they are. Ian Berry conjures remarkably detailed portraits and urban landscapes using nothing more than discarded jeans. Over many weeks he cuts, stitches and glues using only the varying shades of the fabric to provide contrast and shadow. The effect is extraordinary.

Ian's denim epiphany came during a trip back to his childhood home in Huddersfield. During a big clear-out session, Ian found himself staring at a big pile of unwanted jeans destined for the charity shop. Affectionate memories came flooding back, along with a wave of tactile enthusiasm for the fabric. At that point, he knew he'd found the key to his artistic career.

He says: "I found myself staring at them, mourning the old pants from my youth. I was transfixed by the ripped, faded beauty of the fabric. How the different blues contrasted against each other in a sea of shades. I couldn't part with them; they were part of who I was then. And who I am now. I remember it was a time in my life when I was looking for a voice when I suddenly realised that what I had been looking for had been there all along." 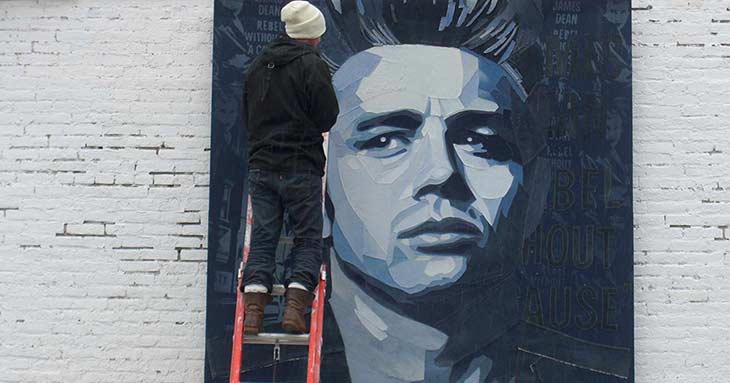 Ian Berry began his artistic experiments with denim while working as an art director in London and Sydney. Despite building a successful career in Adland and creating campaigns for brands such as Nissan, Guinness and Talisker Whiskey, the call of the rivets and seams was too deafening to ignore.

Eventually, the public caught on and Ian enjoyed enough commercial success to devote himself full time to his art. He had two near sell-out shows in Sweden, his new adopted home, and also showed in the US and Portugal. His work has since sold across Europe, America and Australasia to private, public and corporate collections, and has been featured in innumerable art and fashion magazines from Elle to Playboy.

Naturally, Ian's enthusiasm for denim goes beyond exploring its artistic potential. He's also become something of a historian of the textile. So you can imagine how delighted he was when the town of Fairmount, Indiana got in touch with him last year. Fairmount is the home town of James Dean, who arguably launched denim as a fashion item when he wore those Lee Riders in Rebel Without A Cause. So when the James Dean Museum wanted a mural, they came to Ian. He based his work on the iconic Roy Schatt photograph to create what has become the first denim ‘street art’ project in the world.

Although Ian has exhibited all over the world, he has never shown in his home country. Naturally the Catto Gallery is thrilled to host his debut exhibition, for which Ian has created a special collection of London themed works featuring Hampstead, Camden, Borough, Shoreditch and more. Come in and see them. They're amazing. Dress code: casual.

And what absolute treasures they are. Ian conjures remarkably detailed portraits and urban landscapes using nothing more than discarded jeans... The effect is extraordinary. Iain Barratt Director Catto Gallery

This is a 45 second promo for 'Behind closed doors', Ian Berry's latest exhibition of artwork in demin presented by Catto Gallery starting on 16th November 2016 at 'Gallery Different' 14 Percy Street, London.