During a big clear-out session at his childhood home in Huddersfield, aspiring artist Ian Berry found himself staring at a big pile of unwanted jeans destined for the charity shop. He was overcome by nostalgia and a tactile enthusiasm for the fabric. He’d found the key to his artistic career.

Ian worked hard to develop a new visual aesthetic based around this most democratic of materials. Soon, he had enough fans to leave a flourishing career as an art director – and to dedicate himself to his art full-time from his studio in Sweden.

Not long after, Ian had successful exhibitions in Sweden, the US, Portugal and Denmark. In 2012, he wowed the UK with a sell-out show at the Catto Gallery. We’d never seen crowds like it!

Not surprisingly, given his unique and accessible work, Ian has also enjoyed huge media attention. He’s featured in over 40 magazines and papers all over the world – from the Daily Mail to The Times, El Pais to Chile’s La Tercera. He was named one of Art Business’s ‘30 Under 30’ artists. You might have seen him on BBC Breakfast too.

Such widespread attention has won Ian Berry many commissions. The most prestigious of them all? A portrait commission for the ‘world’s best dressed man’, Giorgio Armani.

Now, Ian is ready for his second show at his only UK gallery. Some of the work here has been previewed at art fairs in the US and Portugal. The pieces won huge acclaim – and now they are available to buy at last.

Ian Berry was introduced to the Catto Gallery by one of the gallery’s most admired artists, Colin Fraser. Here, Fraser describes what he loves about Berry’s work…

Ian uses denim as a painter uses paint, but with a difference: he makes what I call ‘denImages’. The entire surface of these works is made from denim. The scissors are Ian´s paint brush and he handles them with virtuosity.

In each work, Ian carefully selects denim samples that he cuts, trims, tears and then glues to create works of astonishing depth and space. This depth pushes the boundaries of conventional central perspective by building up layers that reach out from the picture plane and draw us in to look again.

Our engagement with the work is further flamed by the figures which often feature. They may also be made of denim but they feel real – and we speculate on their thoughts and preoccupations as they take their place in the busy scenes.

The graphic clarity of the pieces is further heightened by the typography displayed on many signs and billboards. These objects surprise and seduce us. We’re bombarded by ads in our urban environments, yet to see them rendered so beautifully in Ian’s denim is to see them for the first time. It’s the same with the LP record covers, which show iconic images shaped in shades of blue to startling effect. And they do so without a hint of nostalgia or sentiment.

These ‘denImages’ succeed in moving the viewer on many levels. We are confounded by their physicality; we feel like we are part of the scene. In Ian Berry’s images, the cold cityscapes with their pubs, subway cars, advertising displays and neon signs are all rendered with a human touch. This humanity forces us to engage with aspects of the modern world that we would normally ignore.

When I walked into Ian’s studio shortly before this show and saw the remarkable development in his work over the last two years, I was blown away! He is an artist of real talent and one who is certainly destined for great things. 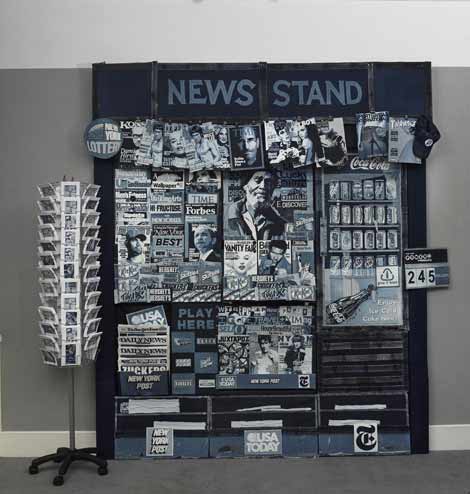 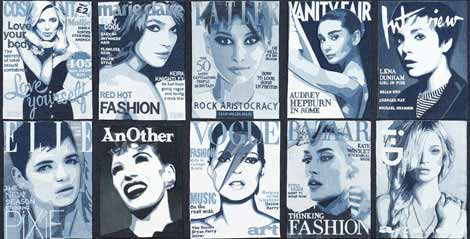 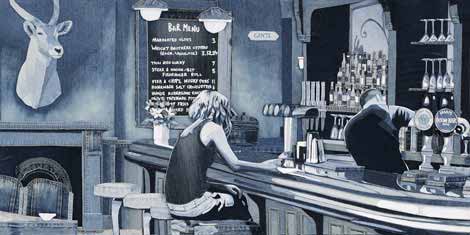 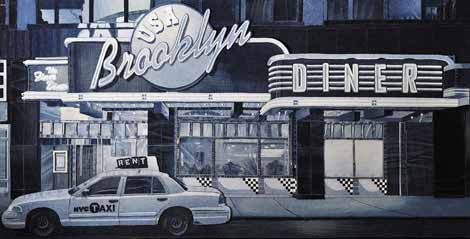