John Duffin RE is, without doubt, one of Britain’s most industrious and prolific printmakers whose prints will be familiar to many art lovers both via their regular appearances in the Royal Academy of Arts Annual Summer Exhibition and frequent showings in selected group exhibitions and over 30 solo shows since 1990.

His prints and paintings of cities, in particular those of London (where he lives) and of Barrow-in-Furness (where he was born and raised), capture the dynamism and energy of city life, evoking a real or imagined human story behind each carefully crafted etching or oil painting. John has won prizes for his etching and painting (including ‘The Most Outstanding Print Award’ chosen by Sir Peter Blake at the Originals National Open Print Exhibition in London, in 2010) and his work is in public and private collections in the UK and abroad.

After taking his BA Fine Art at Goldsmiths’ College, University of London (1985-88), John took his MA in Printmaking at Central St Martins, University of the Arts London (1988-90), which is where I first encountered him. I graduated from the postgraduate printmaking course at Central the summer before John started and so I took an active interest in the work of fellow Central alumni of that era. John’s work, back then, had the same clearly defined sense of draughtsmanship and focus that it has today. Prints and paintings from those days often featured large powerful figures – working men from Barrow - stoically grim, muscle-bound labourers cast adrift in a grittily industrial wasteland.

Duffin’s images spoke of Thatcher’s Britain and the closure of shipyards in which generations of such workers would once have been employed. Duffin portrays them hanging out, aimless, looking listlessly for dates; or playing slot machines and casting dice in shabby amusement arcades; or wandering aimlessly along deserted beaches; or falling down drunk – Hogarthian expositions of unemployment, dissipation and despair. These heroic, working class giants recall Peter Howson’s drawings and show a comparable sensibility in his exaggerations of each subject’s features and physique, a distinctive style which borders on, without ever quite tipping over into, caricature – for John is clearly moved by his subjects. Having trained, initially, as a naval draughtsman in Barrow before leaving for art school in London, these men are his peers and he clearly respects their humanity and their dignity.

More recent prints and paintings from the last two decades have devoted intense attention to the urban environment of London, which Duffin has made his home: sweeping panoramic views along the Thames, vertiginous aerial views looking down on tube and train stations, shops and cinemas – streets slick with rain, or with pedestrians casting long shadows by moody streetlight, or drenched in dazzling sun. In these compositions, the architecture dominates while much smaller, shadowy, sometimes solitary figures hurry by or linger poignantly, causing the viewer to pause and reflect on who they might be and what their individual story is in the jigsaw of lives that makes up the metropolis.

Although the balance between figure and environment has changed so that the figures are now much smaller compositional components, it remains always the figures that suggest their own stories in John’s works – the diverse settings of London providing an ever-changing, dramatic backdrop to the human lives the city contains. Images frequently feature a young couple – perhaps the artist and his partner – seen sitting on a bench on Primrose Hill, or looking out over the river towards Battersea Power Station, or hurrying down Regent Street in the rain, or waiting on a deserted platform for the last tube train home.

At their best, Duffin’s paintings and prints recall something of the mood of American artists: Edward Hopper and Martin Lewis. Hopper’s pensive café paintings, that draw you into the orbit of each seemingly isolated customer, and Lewis’s etchings, capturing the energy, bustle and occasional solitude of 1920s New York night life, are clearly artists and imagery to whom Duffin is indebted. The atmosphere, too, of Duffin’s work seems somehow to hark to a bygone era – the architecture, such as the London Eye, may be contemporary, yet this is a London peopled with smartly be-suited gents and young women in 1950s-style A-line skirts, heels and trench coats. Duffin also adds to the mix something of the comic-book-noir of Batman's Gotham City as envisioned by artists working for DC Comics from 1940 onwards. This is most evident in his etchings on copper plates, characterised by a confident, rigorous and strongly linear style of draughtsmanship with emphatic, tonal, cross-hatching printed, in John’s own words, ‘with the blackest ink on the whitest paper I can find’. Yet in his watercolours and oils too the influence of the best comic-book art of Marvel and DC Comics is apparent in his use of a heightened colour palette in which vivid red and orange sunsets jostle for attention with purple-black shadows cast by people and buildings and the cadmium yellow light streaming from shop windows and tube station entrances. You could imagine each one of John’s images, over the last 25 years or so, forming part of a vast unfolding autobiography printed as an epic, full colour, graphic novel. Yet each image also evokes its own entirely independent and self-contained narrative, whilst also comprising part of the coherent and consistent whole that is his entire oeuvre. These are memorable images rendering remembered experience and fictional encounters with a distinctive style and passion. 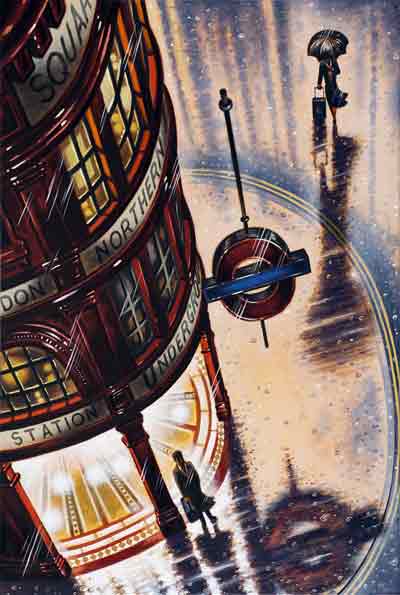 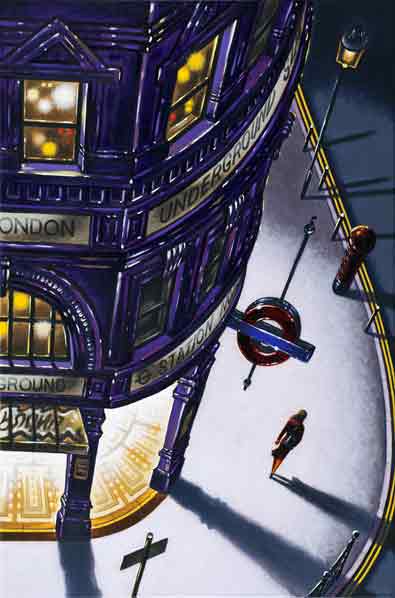 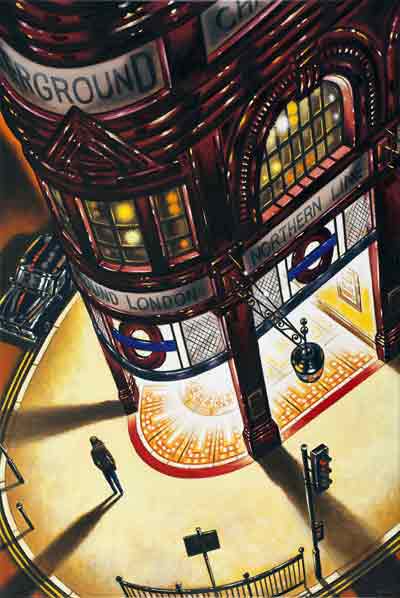 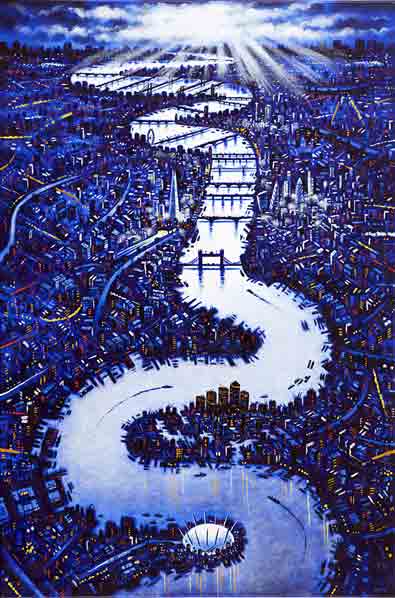 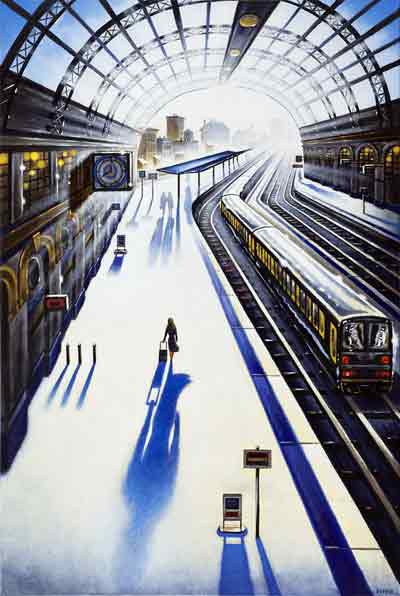 Keep up to date with John Duffin's work