These are the opening lines of Tennyson’s The Hesperides, a poem about the mythical sisters who tend a garden at the end of the world. The garden contains trees whose golden apples can bestow immortality. The myth of The Hesperides has inspired artists down the centuries. Beautiful women secretly tending a magical orchard in the mountains? What’s not to like?

Pam Hawkes is the latest. She says she thought of Hesperides often when painting her newest collection of works for the Catto. Perhaps this is not surprising. Throughout a career that has made her one of Britain’s favourite painters, Pam has created incomparable works whose subject is frequently ethereal women, and whose palette typically contains gold. The Hesperides fit right in.

Not that Pam has re-created the myth literally. She’s more interested in the thematic possibilities. “I think it’s the idea of these sisters quietly gardening at twilight, and all the themes of fruitfulness and renewal.

I find that very evocative,” she says. These thoughts gave rise to paintings like Homecoming, Twilight Alchemy and Daughter, each of which features fruit, gold and beautiful unknowable women.

The latter has another personal dimension for Pam. Her own daughter recently had her first child, and this painting clearly connotes a sense of fecundity. Becoming a grandmother has been bittersweet for Pam. Her daughter became pregnant just weeks after Pam’s beloved partner David passed away. In mourning, she found it impossible to paint. And yet, when she did pick up a brush again, it was painting that helped her to grieve.

One unexpected result of this was a sudden compulsion to paint seascapes, three of which are in this show. “I don’t know where it came from,” she says “They’re like nothing else I’ve done. Even the technique I used - with a palette knife - is different. A Russian friend told me that in Russian culture the sea means emotion. Maybe that’s it.”

The seascapes represent the latest chapter in Pam’s artistic story, which began when she was just 11. In 1970s Birmingham it was possible to take an exam at that age and go straight to art school as a teenager.

Pam took the test, and passed. Her reward was a place at Moseley School of Art, where half the day was dedicated to drawing and painting, the other half to ‘proper lessons’.

Pam admits she barely bothered with the latter. But she adored learning the craft of painting and discovering new styles. Even at this young age, the was drawn to Byzantine icons – the gold tinged religious paintings created by Eastern European painters of the dark ages and early medieval periods. “They inspire a kind of reverence in the viewer. I find this fascinating. I’m not religious. But I love the stillness in these works,” she says.

Icons would, of course, become the defining influence of Pam’s artistic career. But that career didn’t start until she reached her thirties. Life got in the way. Pam went to work in Birmingham’s jewellery quarter. She became a mother. It wasn’t until she was in her thirties that she found that she could focus again on painting. She studied for an MA from the University of Central England and soon after graduating in 1998 began lecturing in fine art and life drawing at schools and universities across the midlands.

Pam’s instantly recognisable work has been exhibited widely in the UK and the US. She has won awards from the Royal Birmingham Society of Artists and the Coutauld Institute. Meanwhile, she just keeps on working. “I don’t really believe in inspirational moments,” she says. “I believe in work. Strange things happen when you go to the studio and start painting. I get so many ideas I have to stop and write them down. It’s wonderful.” 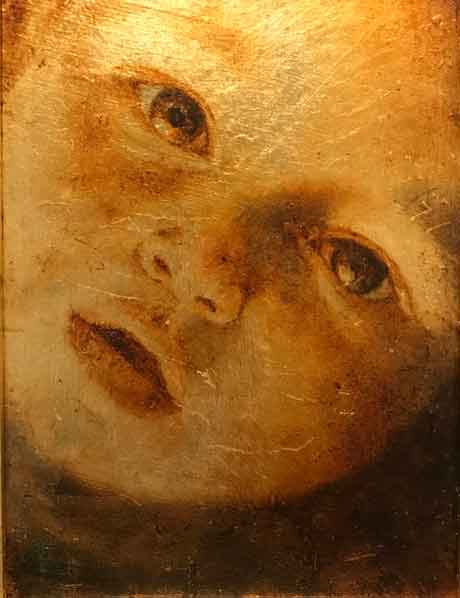 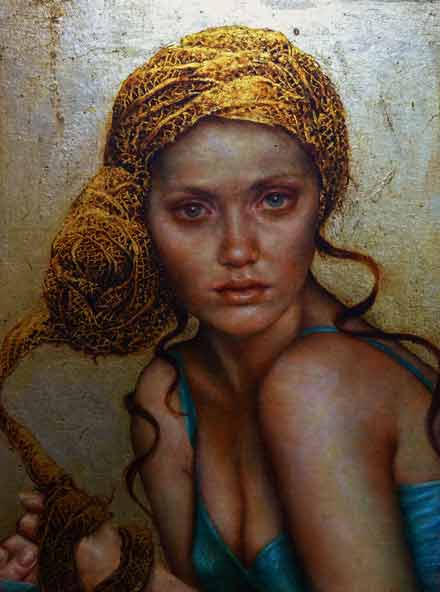 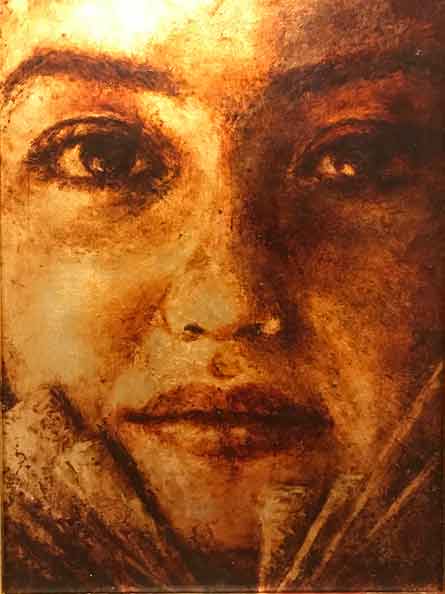 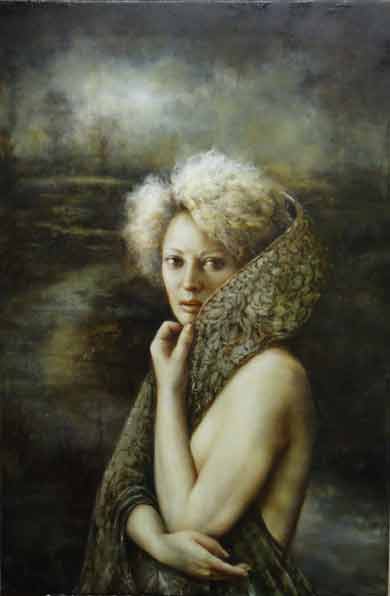 The Veil of Night

The Veil of Night 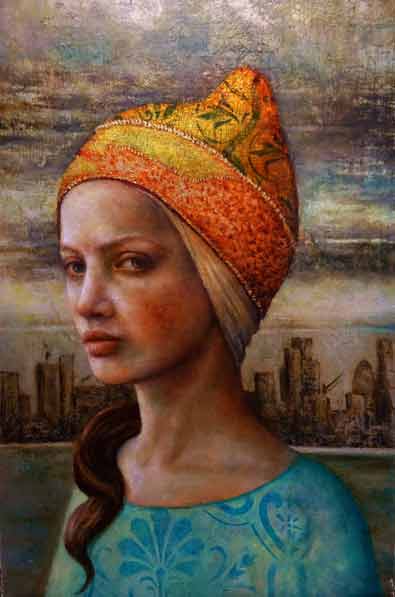 Once Upon Another Time

Once Upon Another Time 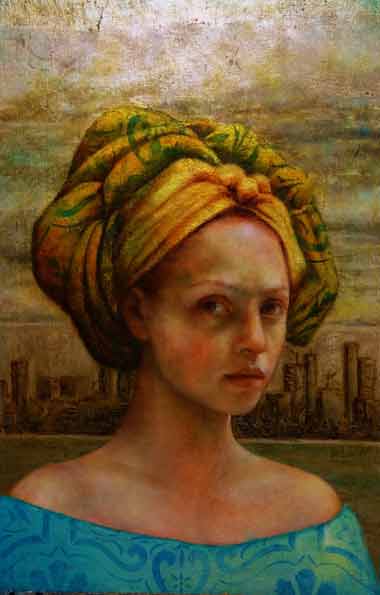 Once Upon Another Time I

Once Upon Another Time I 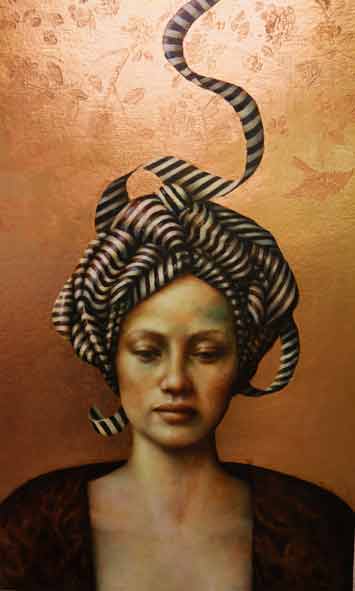 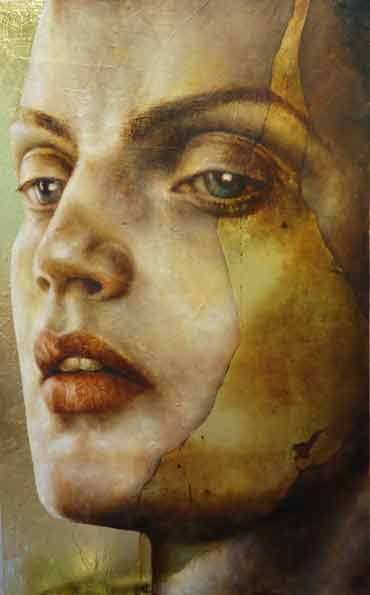 Nothing is Ever Broken

Nothing is Ever Broken 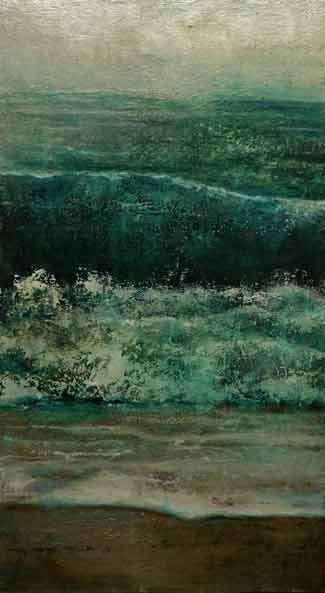