A Pam Hawkes painting is a curious thing. It’s all at once a blend of the modern and the medieval. It’s personal and yet it has a defiantly epic quality. And though its subject can be sensual, the models portrayed often radiate a cool detachment.

This ambiguity is what people love about Pam’s work. And they really do love it. Pam is one of the Catto’s most popular artists, and her fans will be delighted with her fabulous third show.

The new works include glorious examples of Pam at her best. Give Me Shelter, for example, has it all: the two women are beautiful, but give off an inscrutable detachment. Meanwhile Pam pays meticulous attention to the decoration in the background, to the floral curlicue and the girls’ ribboned head dress.

You see a similar combination in Out of Time and the Four Seasons paintings, but here the debt to Byzantine religious icons is much more explicit. The golden sacred art of 1,000 years ago has always been an inspiration to Pam, which makes her pretty unusual among contemporary painters. And she mines this seam to magical effect. She explains: “The craftsmen who painted these images were not allowed to veer from the imagery prescribed by the church. And yet these icons seem to take on whatever persona the viewer, or worshipper, needs it to be. My work takes a lot from this.”

Pam arrived at her unique style (termed 'modern gothic’ by a former teacher) over decades of hard work and study. She started out as the classic art school pupil - focusing on art from the age of 11 - before finding work in Birmingham’s famous jewellery quarter. But then life intervened and it wasn’t until she was in her thirties that Pam had the opportunity to re-visit her talent. Soon after, she had an MA from the University of Central England and began lecturing in fine art and life drawing at schools and universities across the region.

She admits she doesn’t always practice what she teaches. Pam knows the value of preparation, but often ignores it in her own approach to painting. “I go against everything I was taught, and have taught,” she says. “I rarely do research or preparatory drawings. I go straight in with half an idea and work it out as I go along.”

Well, it works. Pam’s free-wheeling approach results in some spectacularly original ideas. And they certainly don’t look unformed or unfinished. Quite the opposite. Pam’s paintings are always beautifully composed - even when they are outlandish in what they depict. Case in point: Seasons I - a beautifully balanced arrangement of woman, foxgloves and - yes - halo of bees.

The echo of those Byzantine icons is clearly evident here. The golden colour scheme, classically posed subject and unusual framing device. But the twist is just so weird and wonderful. And there are other instances of Pam’s vivid ideas in the show: Seasons III, where hair turns into golden autumn leaves; Tracing Shadows, with its strange ‘picture within a picture’ puzzle.

Pam is happy to leave us to fill in the gaps. She says: “The characters in my paintings don't readily give away their stories..It is a seductive world that they seem to hint at, a place of myth-making and mystery. They invite us in at some level to speculate on the idealised memories of their lives and to give a second thought to the half forgotten fables we each collect and carry through our own world.” 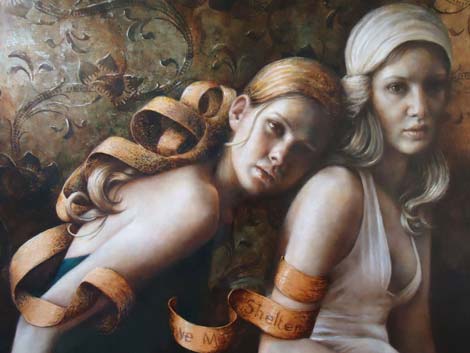 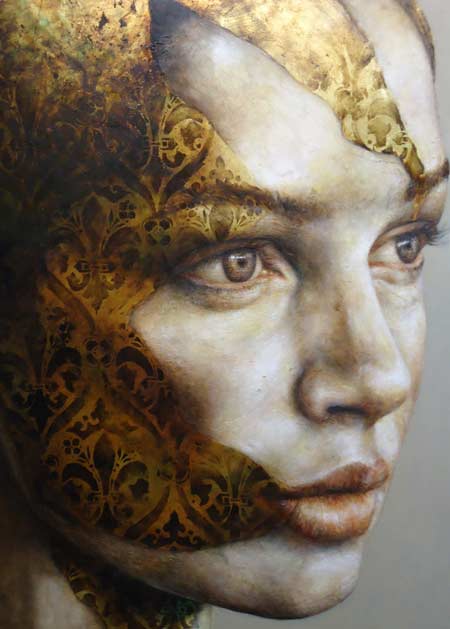 You Made Me III

You Made Me III 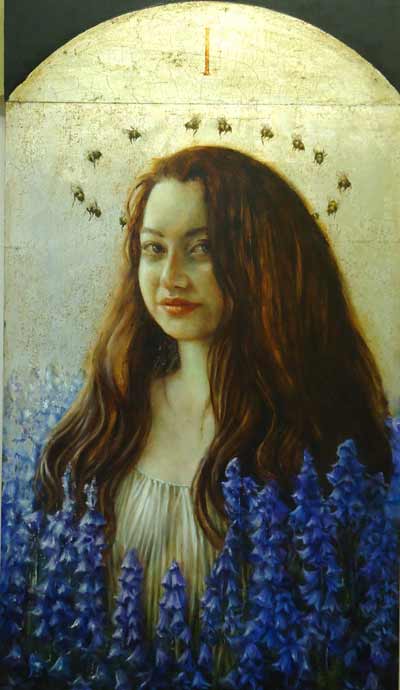 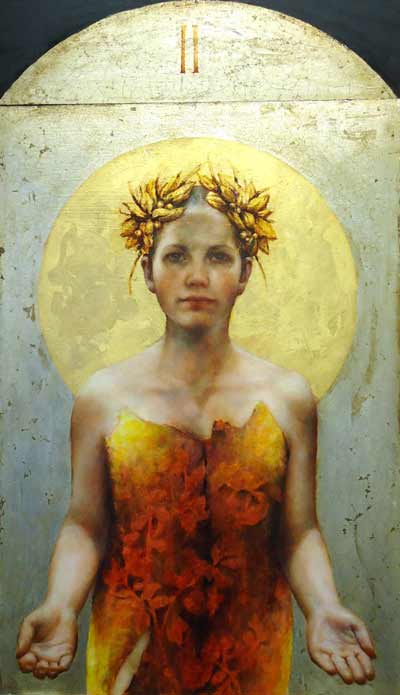 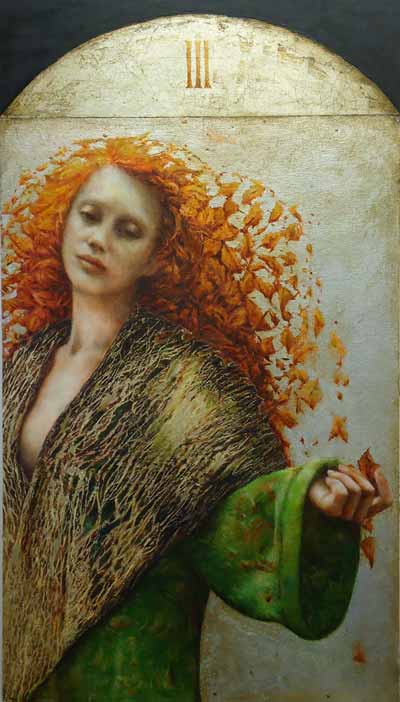 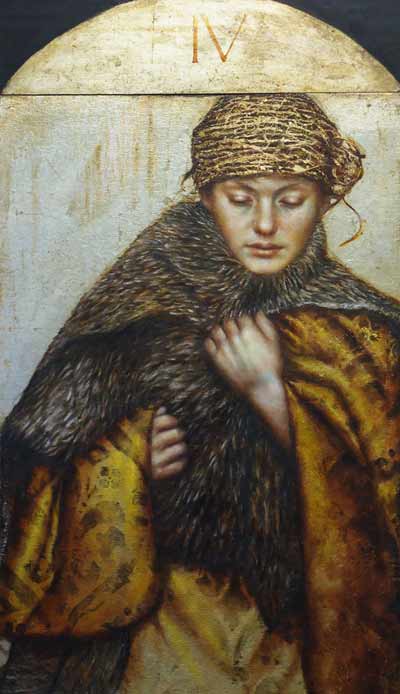 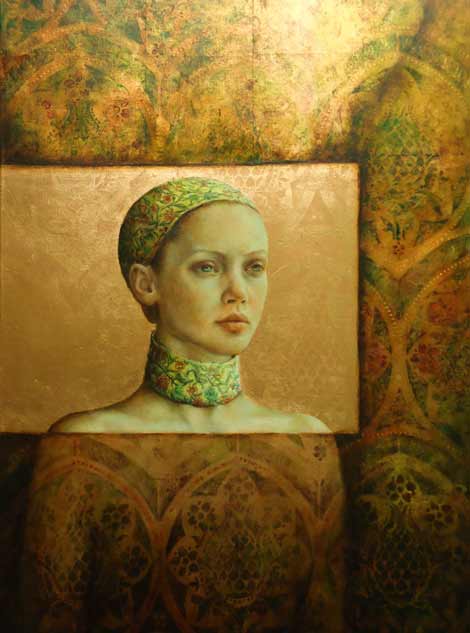 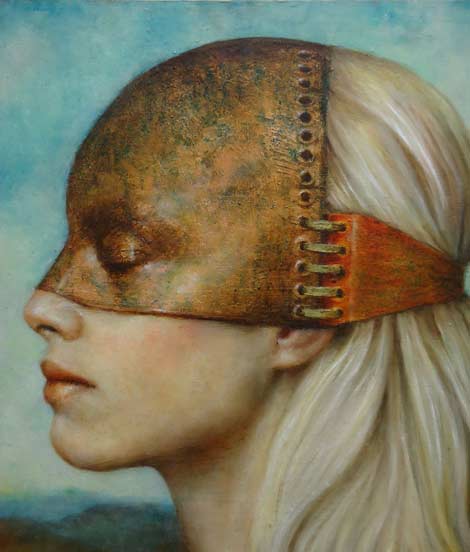 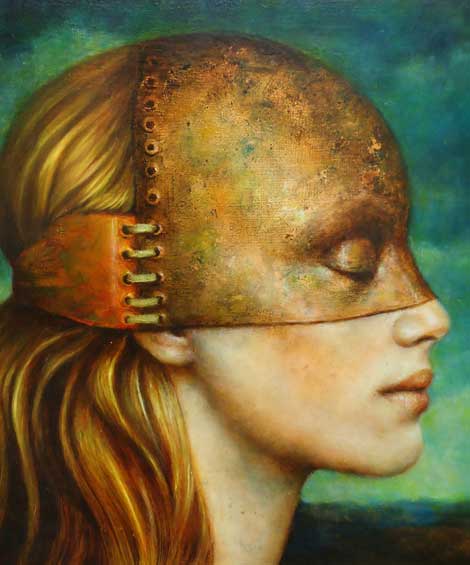