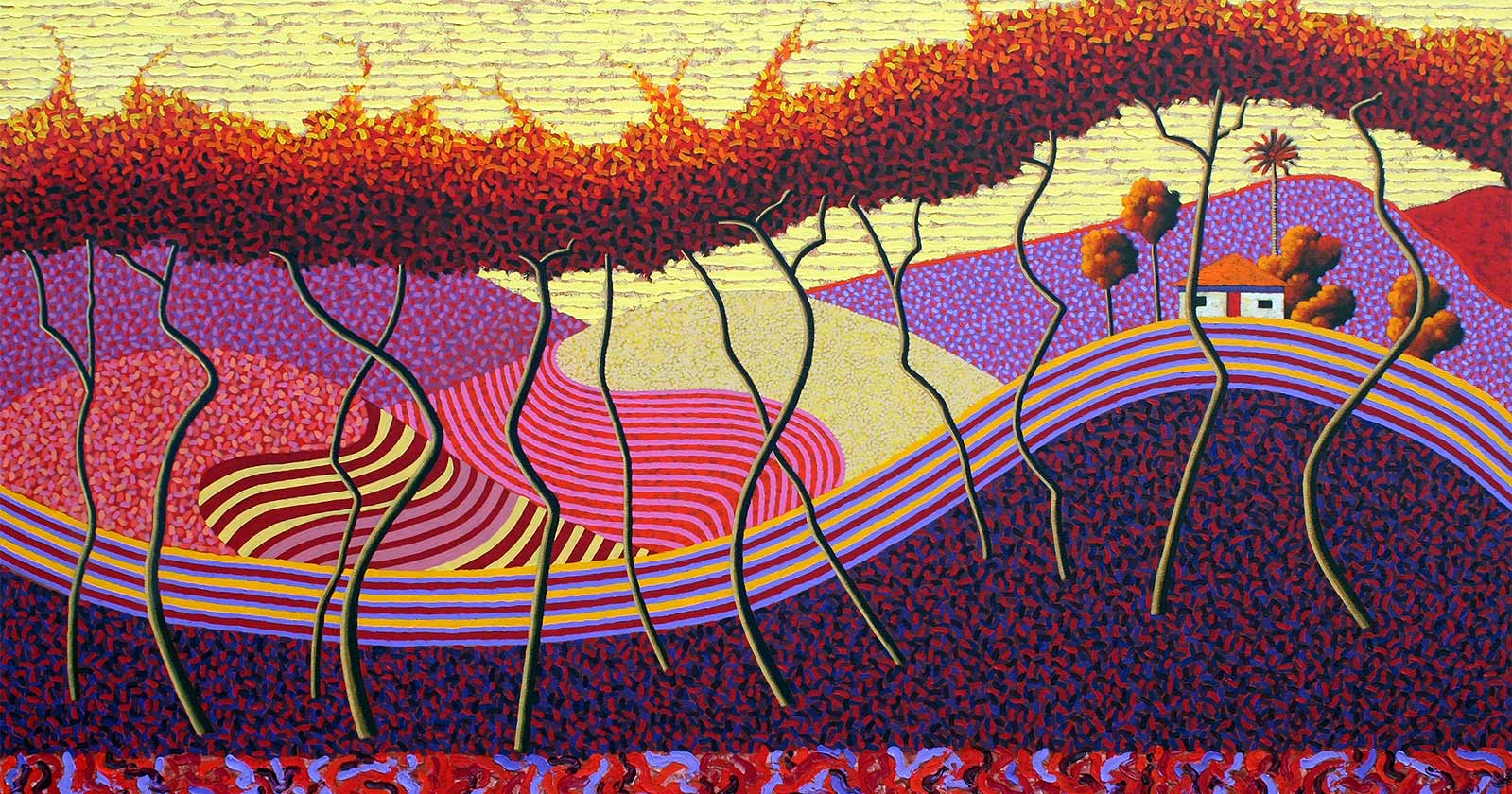 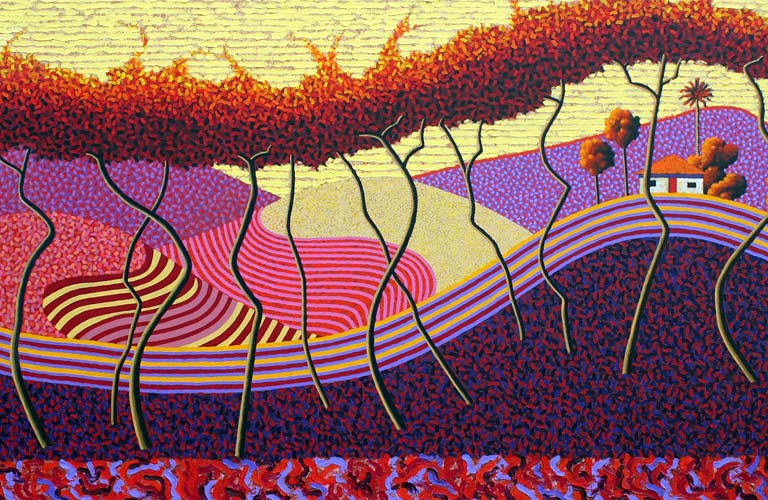 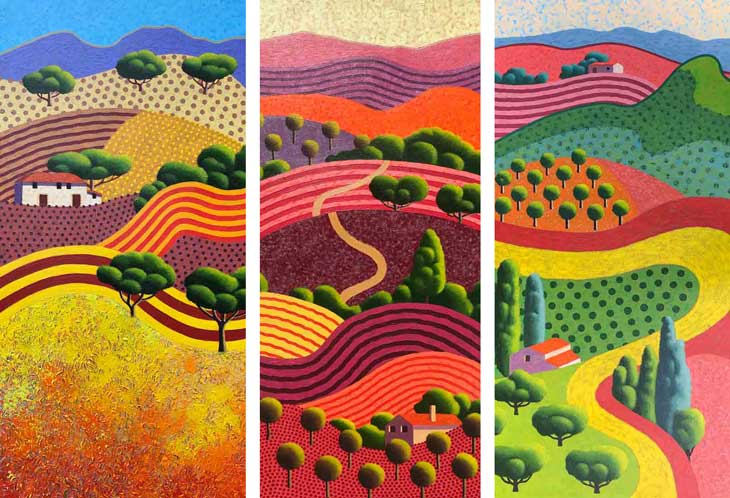 Poul Webb’s flattened landscapes and perspective reimagines the man-made elements – ploughed as geometric patterns. He also throws out any suggestion of ‘realistic’ colour. The end result is a joyous painting style that hovers somewhere between the real and the abstract. 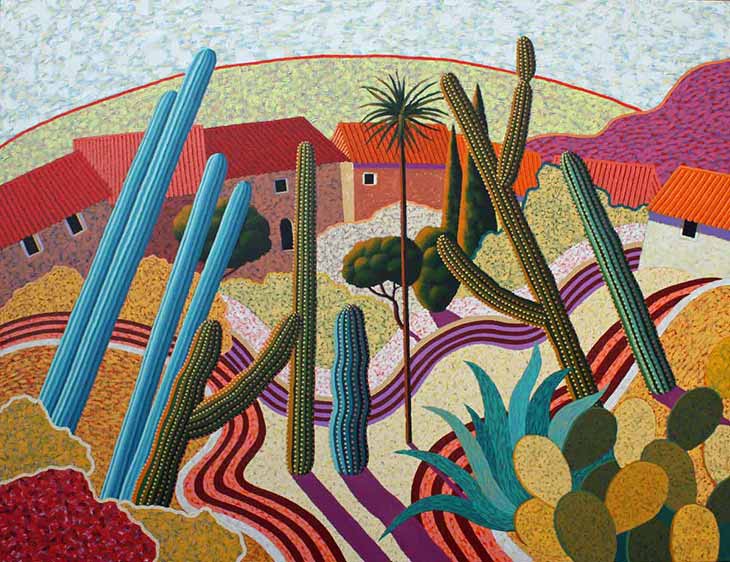 In the early 1970s, Poul Webb travelled to Yugoslavia in search of the exotic. He found it. The landscapes reminded him of the work of Grant Wood. Poul began experimenting. He produced beguiling landscape paintings, brightly coloured and arranged in pleasing geometric patterns. This was the origin of a style that Poul is still pursuing, an approach that has made him one of the UK's most acclaimed landscape painters.

In the early 1970s, Poul Webb travelled to Yugoslavia in search of the exotic. He found it. Many years before the fall of communism, hardly anyone travelled to the backwaters of Serbia and Croatia. Those that did discovered primitive agricultural landscapes with an unspoiled beauty. Poul was one of them.

The landscapes reminded him of the work of Grant Wood, one of the US's great 20th century painters. Inspired by the Yugoslavian wilderness and his memories of Wood, Poul began experimenting. He produced beguiling landscape paintings, brightly coloured and arranged in pleasing geometric patterns. This was the origin of a style that Poul is still pursuing, an approach that has made him one of the UK's most acclaimed landscape painters.

Though this period represented an artistic breakthrough for Poul, he had pursued a creative career since leaving Cambridge Art School in the 1960s. There, he studied graphic design and illustration, and had met celebrated alumni such as Roger Law and Peter Fluck (who created Spitting Image) and Pink Floyd's founder Syd Barrett. In fact, Poul hired the pre-fame Floyd to play at the college Christmas party.

On graduating, Poul began a career as a magazine art director. But the desire to paint nagged at him. New York was where it was all happening; he decided to go. In fact, his friend Roger Law had just returned from NYC. He advised Poul to seek out Andy Warhol – which was how Poul ended up briefly working on design ideas for Warhol's 'Interview' magazine.

Living in the Big Apple gave him the chance to visit the city's great museums, and it was here that Poul discovered greats such as Thomas Hart Benton, Edward Hopper and Grant Wood – all of whom were largely unknown in the UK. Inspired, Poul took up painting again. He hasn't stopped since.

It's been a highly successful career. Poul's work has been represented in major exhibitions both in Britain and abroad, including the Museum of Modern Art in Rijeka and the Museum of Fine Arts in Bilbao. His work is also represented in H.M. Government Art Collection. For many years, Poul exhibited solo shows at the Francis Kyle Gallery in London.

Though Poul has experimented in portraiture and still life, his enduring passion is landscape. And he is especially interested in the ordered beauty of man-made terrains.

"I don’t paint naturalistic scenes in the tradition of, say, Constable and Corot," he says. "I‘m interested in the effect that man has on the landscape. This human impact is not always detrimental to the human eye. On the contrary, we often travel great distances to see things like crop patterns, tea plantations, lavender fields, sunflowers etc. My work will usually feature these landscapes because they make such interesting contours and patterns."

Poul always travels to the locations he paints. "Every piece is based on reality," he says. "You can’t make up topography and habitat in the studio. I will travel in a car for hours on end looking for interesting areas – than I’ll stop and take photos. In the evenings, I will work on sketches and a finished colour watercolour sketch. This is how I approach every painting I’ve done."

When he's not painting, Poul is writing poetry. He has published three collections – to great acclaim. He won the Boho Press and Bluechrome poetry awards and was the Shelagh Nugent Poet of the Year 2006.

Poul believes his painting and his poetry come from the same 'place'. He says: "My poems are always based on a life experience, or a visual memory. There is definitely a link in that sense. Poetry for me is largely creating images in the mind through description. Painting does it on canvas. The two go very much hand-in-hand."

It's a great privilege to welcome Poul Webb for his first show at the Catto Gallery. The colours simply burst out of the frame as we join the artist on a journey across the valleys of Piedmont, California and Madeira and over the mountains of Andalucia, Kerala and Eze. These landscapes are strange and super-real, each one imbued with the qualities of a waking dream. They are a fitting showcase to the UK’s great colourists. Don't miss this show.

Poul always travels to the locations he paints. "Every piece is based on reality," he says. "You can’t make up topography and habitat in the studio.

Keep up to date with Poul Webb's work